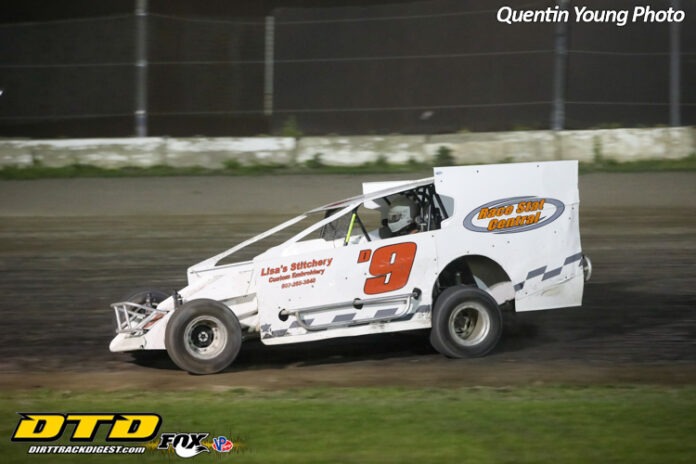 ZMK Connection Modified; The front row of Dennis Clapperton (D9) and Rusty Smith (23t) a pair of drivers out of Oxford, N.Y. came to the start of Scott Stevens green with Clapperton leading going into turn one. Behind him Rusty Smith and Ken Titus (9) start to battle for second and third with Justin Holland (280) looking in both of their rear windows. Mitch Gibbs (2g) rounds out the top five as they all wrestle for position until the first yellow appears on the speedway for a uke tire getting pushed out into the racing groove on lap fourteen. The top five at this point is Clapperton, Holland, Smith, Gibbs, Titus. On the restart Gibbs grabs third and Smith starts pressuring them to work back to the front. The rest of the feature went nonstop and the top five at the finish saw Rusty Smith getting back to second behind Clapperton with Gibbs, Holland and Titus. Heat race winners were Titus and Holland. Speaking with Clapperton in the Gotta Go Mirabito victory lane he mentioned it being career win number one in the Modified division. He talked it over in the off-season with the family and decided to do this and said the key is getting the car to handle well and you have a good shot. Handicap being used after having some tough luck got us the front row starting spot and I didn’t want to let that go to waste. The car felt really good and I knew we had a great shot at the win tonight and it feels great.

Ted’s Body Shop Crate Sportsman; It took a couple of tries to get the action underway as there were minor mishaps before a lap could be recorded and that put a couple of the cars to the pits or to the back of the pack. Dylan Nichols (01) grabbed the lead from the drop of the green and had a slight advantage until the (7H) of Allan Hodge was able to wrestle the top spot away. Brandon Loucks (23) and Blain Klinger (9k) were two guys on the move from the back of the pack after the original start mishaps. Fred Smith (119) became the recipient of a couple of cars in front of him slightly touching and drifting high as he shot underneath for the lead. Once out front he handled all comers and handled the restart with ease to go on for his second career win at the speedway. Following Smith across the line at the end of the twenty-five-lap feature was Dustin Harris (96), Allan Hodge, Dave Rosa (61) and Brett Tonkin (27K). Brandon Loucks got back to sixth and Klinger to ninth after the first lap mishaps. Smith in victory lane mentioned how his car was junk in the heat race and they made wholesale changes for the feature. After a couple of laps under green, I knew we would be good and when the little jingle in front of me happened it was go time. Heats were captured by Nichols, Harris, and Hodge.

Rinker Insurance Agency Open Sportsman; Duane Knapp (6n) and Craig Pope (42c) came rolling out of turn four to get the feature race underway. The two big movers early in the event were Dave Rosa (61) and Jim Cummings (7) making their way forward from their starting spots of ninth and sixth respectively. Rosa grabbed the lead on lap thirteen and was never headed from that point. Behind him there was a fierce three car duel for second through fourth between Knapp, Cummings, and two-time winner Bill Deckleman. At the finish following Rosa across the line were Cummings, Deckleman and Knapp. The two heat winners on this night were Blaine Klinger (9k) and Pope. In the Gotta Go Mirabito victory lane Rosa mentioned how good the car was working and knew it was imperative to get to the front fast and protect the bottom tonight. He also mentioned he wanted to keep pace with Deckleman as they both have two wins apiece after four events.

Chambers O’Hara Sales Service & Rentals; Kurt Decker (89) and Dusty Decker (20jr) brought the feature to starter Scott Stevens green flag. Last week’s winner Dusty Decker having a slight advantage going into turn one but a yellow flew over the track and brought the pair back to the restart. On take two Kurt took to the front with Dusty in tow. On lap two the caution flew for a tire going out on the track as Dusty made contact with it and going around. Back to green we go and on lap three Dusty and Jerry Lobdell Jr (21L) make slight contact and spin bring out a yellow. One other yellow on lap nine for Leonard Miller (x23) spinning was the only thing slowing the torrid pace being set by eventual winner Kurt Decker. The top five at the line behind Decker were Doug Polhamus (KP1), Damon Decker (89jr), Doug Stack Jr (four1s) and Dusty Decker. The single heat went to Kurt Decker to complete the sweep for the evening. Decker mentioned during the interview how it is truly a Family thing as they work hard by day and they’re in the garage by night. He gave a huge shoutout to his wife as he says if she didn’t go with us, he wouldn’t have the desire to do it either. Decker also thanked the sponsor of the division for their support of the division. I mentioned to him it was a competitive division with an average of eight or nine cars weekly but four weeks and four different winners. He agreed and mentioned that the class was down all over, it is just not here.


The Trophy Guy and Sports Connection All Star Slingshots; Dan Slosek (28s) and Gordan Smith (44) both heat race winners as it was a heads up start brought the field to green. Smith grabbed the lead and never looked back as at times had a straight -away lead on the rest of the field. Lap ten found the only yellow of the fifteen-lap feature slow Smith’s pace for two cars getting together and going around. The two cars were Jim Pollard (57) and the (27) of Alex Boughton. Back to green and Smith goes back out to a good lead to cruise to his first career feature win. Following Smith across the line for the top five was the big mover in the event Carson Rothwell (4), Slosak, Julia Renwik (20) and Bob Boughton (81). In victory lane Smith was happy to get that first win and many family and friends were down there with him to help celebrate. He thanked his great sponsors and for a youngster did a great job doing it. I asked him what he thought about when the caution came out on lap ten. He just said I need to get back going and hit my marks. Also, in victory lane I talked to the Junior Slingshot winner as the get a separate plaque for the first across the line and there were two on this night. The winner was Dustin Schen (D9). It was his first win he told me and was he first time here and only his third race as he has been to Utica Rome Speedway also. The nights we don’t run the UR does.

A.M.P. After Thoughts; During intermission many fans took advantage to go down on the horse track for meet-and-greet the Ted’s Body Shop Crate Sportsman and Rinker Insurance Agency Open Sportsman drivers as part of fan appreciation night. The fans both old and young had a chance to get pictures with Andy Armadillo, the Texas Roadhouse mascot who was on hand and he also gave toys with kid’s meal certificates on them. Drivers as usual had candy and or hero cards to hand out also. I also want to give a huge shoutout to Johnny Williams the driver of the mud turtle (312) in the Ted’s Body Shop Crate Sportsman division. He was gracious enough to bring two bicycles a boy and a girl to give away to a youngster who signed up at the new kid’s club. Speaking of the kid’s club a big thank you to Cinnamon Williams for stepping up to run the club. If anyone would like to donate to the kids club for different supplies to make it fun for the youngsters or bikes for weekly giveaways please contact the speedway using this email aftonmp2017@gmail.com or see me in the tower on race night. You can also give promoter Ron Ford a call at 607.624.3772

Upcoming this week we play honor to some of the drivers in the past throughout the history of the track originally built and run Mr. Jim Randall. There will be a couple of vintage cars on display also so come on out and enjoy the four-division show. The Modified and Street Stock division after four weeks have yet seen a repeat winner so come see if the streak continues or will come to an end.