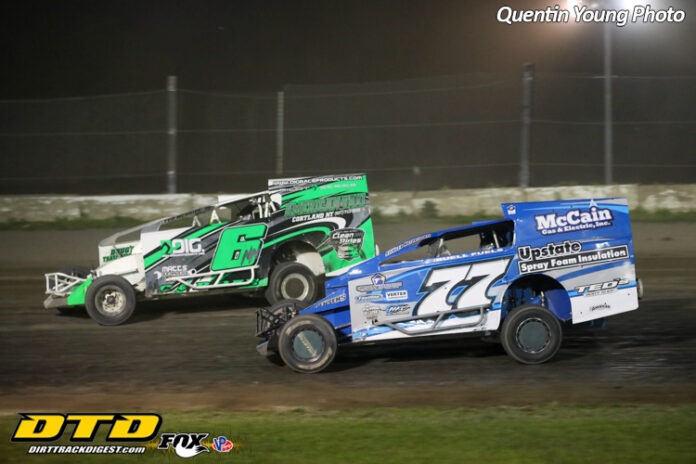 AFTON, NY – On the start to the Father’s Day weekend Nick Nye in his American Taxi (6nn) was the first in the ZMK Construction Modified division to double his feature win total for the season. Coming along with that he added just a little more cushion to his points lead in the division. Alan Barker who is second in points did follow him across the line in his McCain’s Gas & Electric (77) to not lose much ground on the quest for the championship. Other winners on this night were first of the season for Gary Smith (7up) in his Interstate Homes machine in the Ted’s Body Shop Crate 602 Sportsman division. In the Rinker Insurance Agency Open Sportsman division, the win went to Jim Rothwell in his Ted’s Body Shop sponsored number (4) for his first of the season. Finally, in the Chamber’s O’Hara Sales Service & Rentals the feature was captured by the (3k) Rich Fife for his first career win in his Beardsley Sawmill sponsored ride.

The ZMK Construction Modified division; J.R. Hurlburt (6H) and Nicholas Mady Jr (m20) brought the twenty-car field to the start of the thirty-lap feature with Hurlburt immediately grabbing the lead. Hurlburt distanced himself by just about a straight-away lead and then on lap six Dan Vauter (85) looped it in between three and four which brought the entire field back to Hurlburt. On the restart the top five are Hurlburt, Mady. Paul Jensen (57), Bobby Flood (91) and (2G) Mitch Gibbs. On the restart Hurlburt again started opening a huge lead again and Flood gets by Mady as he starts to slow but got it back going after dropping way back in the field. Nick Nye is starting his quest to the front at this point from his tenth starting spot and also Barker is working his way back to the front as he went to the back after a five-car skirmish before a lap was recorded. Heartbreak hits Hurlburt on lap twenty-five as his right rear tire goes down and he goes pit side. Flood now inherits the lead with Jensen and Nye in tow. Nye gets around Jensen and Flood at this time has something in his left rear broke and Nye is now your leader. Flood continues and finished the race in fourth spot. Behind Nye was Barker, Jensen Flood and Darren Smith. Nye thanked his sponsors and crew for such a fast racecar. It works both way for luck on being in the right place at the right time and he has had it both ways and I am glad to get my second of the season.

Ted’s Body Shop Crate 602 Sportsman division; Mike Grover (33G) AND Blake Sarpriacone (69) brought the Crates to starter Scott Stevens green flag with Grover grabbing the early lead. Gary Smith starting fourth was up challenging Grover by the time the field came around to complete lap two. On lap six Smith grabs the lead and then a caution comes out for an incident with five cars involved. Top five at this point is Smith, Grover A.J. Digsby (10a), David Dickey (34) and Sarpriacone. Once back to racing Smith goes back out front and the big movers now are Blaine Klinger (9k) tenth starter and Brett Tonkin (27k) who started eighth on the grid. Klinger grabs second on lap ten and soon he is putting pressure on the leader Smith where the two battled to the end. The top five at the finish behind the top two were Digsby, Grover and Tonkin. Smith in victory lane thanked his sponsors and the folks from the New York State Stock Car Association for the added money and the Randall Family for the bonus money in the Gotta Go Mirabito victory lane. Smith also gave a huge shoutout to the folks at Teo for the advice as he has been struggling with the car and they told him now go get us a win a win he did.

Rinker Insurance Agency Open Sportsman division; Joshua Akshar (4) and Shawn Davis (219) lead the fifteen cars to the start of the event with Akshar grabbing the lead in the early going. Jim Rothwell also in a number (4) from his sixth starting spot is on the move. The only caution of the race comes out early with a tangle down in turn one and two with about six involved. Two-time winner Bill Deckleman (90) was sent to the rear for his involvement per track official. Going back to green saw Rothwell and Akshar in a battle until Rothwell opened up a little breathing room. Akshar was now in a battle to hold off the other two-time winner in this division Dave Rosa in his (61). The top five at the finish were Rothwell, Akshar, Rosa, James Gould (28) and Craig Pope. Other than Rosa that was the highest finishes of the year to date for the other four. In victory lane Rothwell mentioned when I asked about getting the lead around the top of Akshar said the car would go anywhere but once I got the lead I went to the bottom as I figured Rosa would be coming and he loves the bottom. I was not going to give it to him that is for sure. Crew and sponsors are what keeps me going in this sport and I just drive it when it is like it was tonight.

Chamber’s Ohara Sales Service & Rentals; Dusty Decker (20jr) and Rich Fife (3k) led the eleven Street Stocks to the line for the twenty-lap feature go with Fife taking to the outside groove and grabbing the lead into one. Only two yellows slowed the pace of the race as one on lap four for the spinning (h2o) of newcomer Brian Steigerwald and then on lap eighteen for debris on the track. Fife was up to all challengers on this night as he went on to his first career feature win. Last week’s winner Kurt Decker (89) started to put pressure on Fife but had to fend off Doug Stack Jr (Four1s) to protect his position. Following those three across the line were Doug Polhamus (KP1) and newcomer Shane Wolf (81jr). Down in victory lane Fife asked me if he was in the right place an I assured him he was. We talked about how he builds his own stuff and loves to keep tweaking and I said I think you found the hot setup now. Fife thank his girl friend and family and sponsors and the fans for their support.

A.M.P. After Thoughts; The entire show was spun off before ten o’clock with the threat of rain and that was with the introduction of some of the former racer, and or officials in attendance. Jim Randall Jr was one of the folks in attendance as he was there to represent the builder and founder of the speedway his Dad, Jim Randall. It was announced that in the future this event will be named the Jim Randall memorial and hopefully it will become a great outing of some of the starts in years gone by. It was a good showing for the late start on getting this together as twelve folks were there and four called and said they couldn’t make it. The Randall Family gave $100.00 to each feature race winner also on this night.

The New York State Stock Car Association (NYSSCA) were on hand as it was there night to give back to some of the members in all divisions with cash awards. The top two members in all divisions got extra cash and the top three members in the Modified due to an error so they paid all three. Class act for sure. They had track representatives from Afton Motorsports Park, Utica Rome Speedway and Fonda Speedway.

Upcoming this Friday June 25 will be the final fan appreciation night as it will be for the Sling Shot division as it is their week to compete. All the great action on this five-division night will be brought to you by the fine folks of Gotta Go Mirabito. Following that up will be a Tuesday June 29 race of a GRIT Series events for their three divisions they promote and they are Crate Sportsman, Factory Stocks and the 600cc Modified divisions

The Chad Sindoni Memorial is coming up in two weeks on Friday July 2 and it will be a huge race for the Street Stocks as all the laps will be sponsored. All contact information for sponsoring a lap I will have next week but until then get a hold of Doug Polhamus or Doug Stack Jr.