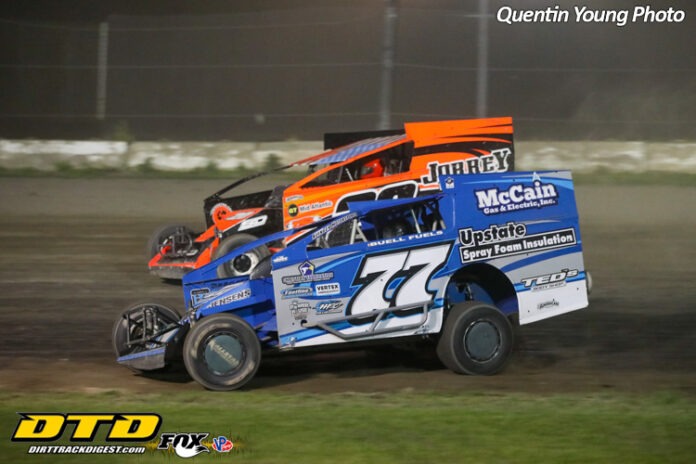 AFTON, NY – The last Friday night in July on a nice crisp night at the Afton Motorsports Park (A.M.P) out of the four regular division racing there was two first time winners this season and two repeat winners. The NY-PENN IMCA series was also on hand for the one scheduled race of the season at A.M.P. and found a former winner in victory lane. All of the action on this night was sponsored by the Open Sportsman division sponsor Rinker Insurance Agency and Tax Masters.

In the ZMK Construction Modified division Alan Barker (77) and Dennis Clapperton (D9) occupied the front row as the came to Gary Kinnie green flag to start the thirty-lap-feature. Barker who has been running bad the past few weeks and being handicapped to the front row wasn’t about to let that starting spot go to waste as he got out front and never looked back. It took two tries to get the first lap recorded as Nick Mady Jr. (m20) who started fifth unfortunately blew a right rear tire just before turn three and it collected five cars with Mady, J.R. Hurlburt (6H) and Jeff Sheely (38) damaged enough to be able to continue. Mady came out four laps later but had more mechanical issued and it finished his night. High point man in the division Nick Nye (6nn) who started sixth worked up to second and late in the race closed in on Barker but ran out of laps. The yellow after the first couple the Modifieds ran the rest of the way without a hitch. The biggest mover late in the race was Alex Tonkin (37) who started ninth and faded early but charged after lap twenty and got up to fifth at the finish doing it all on the topside of the speedway. Heat winners were Barker and Clapperton. In the Gotta Go Mirabito victory lane I asked Barker about how they have been struggling with minor problems or driver error. He mentioned the Klinger Motorsports team got the new power plant in and it seems like a good piece. He thanked his sponsors and crew and all the track sponsors for their support and a big thanks to the fans for coming out.

The Ted’s Body Shop Crate 602 Sportsman saw Scott Torbit (88t) and Blake Sarpriacone (69) lead the sixteen-car field to the start of the twenty-five-lap-feature. Sarpriacone led lap one and then the caution came out for Blain Klinger (9k) stopping on top of turn two with a mechanical issue which was terminal as he never returned. The restart now saw A.J. Digsby (10a) up alongside Sarpriacone for the restart and Sarpriacone hustled back out front and the final caution came out on lap three with five cars coming together in turn three with no serious problems but a couple went pitside and called it a night. The front row is the same as the last one with Digsby able to get by Sarpriacone on the highside as the lap counter hit five. Digsby was able to motor away but really never got too far ahead of rookie Sarpriacone who had his best career finish coming home second. The two heat race winners were Dustin Harris (96) and Brett Tonkin (27k). Digsby in victory lane mentioned he has been referring with Rusty Smith and with the new technology he didn’t have any good ideas. Digsby and crew decided to go back and put the 2019 set-up in the car when he got his first career feature and it worked like a charm to grab his first of the year and second career feature win.

In the Rinker Insurance Agency Open Sportsman division, the front row consisted of Ava Coons (12a) and Jim Cummings (7) for the twenty-lap feature go. Cummings grabbed the top spot with Dave Rosa (61) and Blaine Klinger (9k) quickly on the move. Cummings leads the way to unfortunately breaking as the field goes across the line completing lap five. Cummings coasted to a stop in turn one and done for the night. On the restart Rosa is on the inside and Klinger on the outside with tenth starting Jim Rothwell (4) in third and as the green flew Rothwell followed Rosa on the inside to grab second from Klinger. Rothwell and Rosa battled for three-laps side by side with Rosa low and Rothwell high until Rothwell motored by on lap nine and was never headed. In victory lane we talked about how he got the lead on the top and dropped to the bottom to take away Rosa’s groove. He thanked all his sponsors and I asked if he could grab a fourth in a row next week to match the car number. I am sure going to try. Heat winners were Rosa and Cummings.

In the Chambers& O’Hara Sales, Service and Rentals Street Stock division Kurt Decker (89) and youngest Son Dylan Decker (89d) brought the cars to the green. Dylan got the jump on Dad but before a lap was completed Kurt had the top spot that he would never relinquish. Lap four, seven and twelve were the only stoppage of the racing action all for minor problems. Tyler Yeagle (33), John Carpenter (j12) in a rare start came home third, with Doug Stack Jr (four1s) and Doug Polhamus (KP1) rounding out the top five. Heat wins went to Kurt Decker and Yeagle. Decker in victory lane said the track had plenty of bite in it and the track crew and Ronnie Ford are doing a great job with it. Kurt mentioned he lives nearby and sees them always working hard on the track and realizes it is such a thankless job. He mentioned how it is such a family deal for him and in all his years of racing with many wins he never has had that track championship. With the win tonight he took over the lead and would love to win in front of his hometown crowd.

Morgan Colgrove the traveling announcer for the NY-PENN IMCA Modified tour did their heat and feature races. I can tell you that Eddie Sites (15) and Keith Lamphere (98k) won the two heat races. Twelve cars try to qualify with eleven starting the feature. Eddie Sites broke while leading and Brad Sites (115) captured the twenty-five-lap feature.