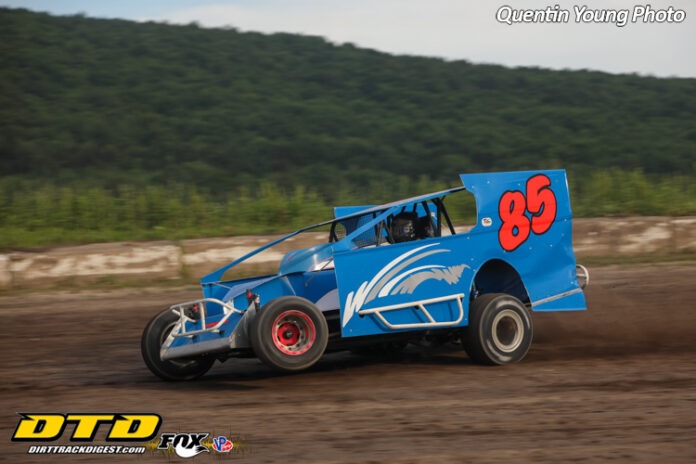 AFTON, NY – Nickolas Mady Jr. (M20) and Dan Vauter (85) brought the ZMK Construction Modified division to Gary Kinnie’s green flag for the start of the thirty-lap feature go. Vauter jumped out to the lead and never looked back as he was able to capture his second feature win of the season. There was plenty of hard racing going on behind him throughout the event with the Alan Barker (77) grabbing second from his seventh starting spot late in the race and closing in on Vauter. Nick Nye (6nn) the point leader going into the night by twenty-two points had a flat on lap twenty-five seriously challenging his chance for the championship. Bobby Flood (91) in his rookie season was running in fourth at that time and was that was second had a chance at the title. Vauter got back out to finish in the fourteenth spot and was able to capture the championship by two points. Flood fell out of third as he and Justin Holland (280) got together out of four on final lap and slipped back to fourth. The top five at the line behind Vauter were Barker, Holland, Flood and Mady Jr. Heat race winners were Mady Jr. and Vauter. In the Gotta Go Mirabito Victory lane Vauter talked about how good it was to end the regular season on a high note after a few weeks of misfortunes. He talked how he enjoys racing here and how great the track was tonight. Nye who captured the championship was a little disappointed in victory lane after not being able to challenge for the win with the flat on lap twenty-five. He thanked his Dad for giving him the opportunity to do this and his crew for the help. All the great sponsors that support his racing team.

In the Ted’s Body Shop Crate 602 Sportsman feature Jeremy Hamilton (42) and Scott Torbit (88t) occupied the front row as the twenty-five-lap feature came to green. Hamilton jumped out to the early lead with all eyes on the three championship point contenders. Brett Tonkin (27k) Dave Rosa (61) and AJ Digsby (10a) were the top three going in. Point leader Tonkin was suffered a blow early as he got caught in a little mess bought could continue but with hanging sheet metal, he had to go pit-side for repair. After the repair he battled back to a sixth-place finish. AJ Digsby went onto win the feature with second going to Dave Rosa (61) and that was enough points to catapult him over Tonkin for the 2021 track championship. Rounding out the top five were Blaine Klinger (9k), Jeremy Hamilton fourth his best finish of the year and Tyler Ward (44). Heat race winners were Hamilton, Dustin Harris (96) and Fred Smith (119). Speaking with feature winner Digsby in victory lane he was happy to get his second win of the season on championship night as he was in contention. I did all I could do and the rest of the stuff falls as it may. Digsby said he set the car up to run the top and the track was great and said I was going to prove you can run the top around the track here. He thanks his crew, sponsors and all his family and friends. The 2021 track champion Dave Rosa mentioned that it felt so good to finally get a championship as he has been so close so many times that the monkey finally got the boot off of his shoulder. He mentioned that the thanks go to his Dad and family and the entire crew.

The Rinker Insurance Agency Open Sportsman feature got underway with point leader Jim Rothwell (4) and Dave Rosa (61) the two contenders for the title. The race would see Jim Cummings (7) grab the top spot from inside the front row with Olin Renwick (5R) his outside counterpart falling in behind. Charlie Hendrickson Jr. (22c) from his tenth place starting position was on the charge to the front. He grabbed the top spot working the high side on the speedway to work around Cummings. Dave Rosa settled in to position three behind Cummings. Point leader Rothwell who failed to make a handicapped spot in the heat racing action had to start in position fifteen but with the fifth place at the finish it was enough for ‘Rocky’ as he is affectionately known as was crowned the champion. The top five at the finish was Hendrickson, Cummings, Rosa, Nick Nye (6nn) and Rothwell. Heat races went to Shawn Davis (219) and Rosa. Hendrickson in victory lane told me it was his first race in four years and he had a lot of fun. He last raced with the Modifieds and lost a couple of motors so took time off and have been working hard and just felt it was time to get back out. He wasn’t sure rather he would be back for the Short Track Super Nationals but the seed is planted now. He thanked his crew and the track crew for the fast track. Speaking with Rothwell in victory lane and his first ever championship here at Afton Motorsports Park he was glad he got it and had a great season with five feature wins along the way. He told me that two years ago he would never run at this track and we laughed about how never might not always be never and he was glad it doesn’t. Thanks go to his family and crew and was happy his grandson won the Allstar Slingshot feature too.

The Chambers O’Hara Sales, Service & Rentals Street Stock race started with Leonard Miller (x23) and Doug Polhamus (KP1) representing the front row as they came to the start of their twenty-lap feature. Polhamus and Kurt Decker were the two folks with a chance to be the track champion. With Polhamus outside the front row and Kurt Decker (89) starting in ninth with Decker fourteen points in front he new his work was cut out for him. Unfortunately for Polhamus his night was over before one lap was completed as in turn three him Doug Stack Jr (4oneS) getting together and into the wall. Stack continued on but eventually dropped out and Polhamus was done at that time. Jerry Lobdell Jr. (21L) was able to power around race leader Miller who led from the drop of the green just before the half-way point and was never headed at that point. Finishing behind the top two was track champion Kurt Decker, Shawn Boynton (3L) and Matt Roberts (613). The two heat race winners were Doug Stack Jr. and Jerry Lobdell Jr. Speaking first with feature winner Lobdell Jr. he was telling me just how good this car is after the team purchased it from former owner Lanson Albanese. I have three wins out of the four races entered. Track was very racy tonight and once out front the car was on rails. Thanks go out to family, friends and my hard-working crew. Track Champion Kurt Decker brought out a few people with him out of the pits to victory lane with him to celebrate. Decker was so happy to get his first ever track championship right here in front of his hometown crowd. Once again, he complimented Ron Ford and the track crew for such a great racing surface. I raced all the tracks in this area and other places but right here is the best. We will party tonight as he says the family and friends are why we do this stuff. We work hard and play hard and wouldn’t want it any other way.

In the All-Star Sling Shots, the race got started with Carson Rothwell (4) and Bob Boughton (81) coming to Gary Kinnie’s green. Alex Boughton (27), Julia Renwick (20) and Calvin Wheelock (77w) all tied at the top in the points with four others mathematically alive but would need a lot of help. Rothwell had the lead early and momentarily lost it to Gordon Smith (44) and then Alex Boughton got to second and stayed there until the end to capture the title. Following the top two across the line was Matthew Backus (52m), Hayden Coons (12) and Calvin Wheelock. Heat race win went to Carson Rothwell. Avery Decker was the only Junior Sling Shot competitor in the field tonight so he was the winner and was already the champion before the race started. Rothwell was happy to end the season on a high note and is really looking forward for next season. Thanks to his family and friends for the fun he had this season, Junior Sling Shot champion thank his family and never has much to say in victory lane as he is really young but he is impressive in running down his list of sponsors. 2021 All Star Sling Shot champion Alex Boughton was very thankful to be able to race here at Afton and hopes Ron Ford has us back next season. Track was really smooth tonight and I could go wherever I needed to be. Thanked crew family and staff of the track.

Afton After Thoughts; It was amazing at the new or returning cars back on championship night and big congratulations to Charlie Hendrickson Jr. returning after four years away from racing and winning the Open Sportsman feature. The track will know remain silent until Brett Deyo brings in his Short Track Super Series for the Short Track Super Nationals at a track where his promoting adventures saw its birth.

After all the racing was concluded a huge fireworks display took place to the enjoyment of the large crowd in attendance. American Fireworks Company out of Oxford, N.Y. is who shot them off and I must say I was quite impressed and I am not a fireworks fan

A boy’s and girl’s bicycle were given away to two happy youngsters at intermission courtesy of the Justin Holland race team.