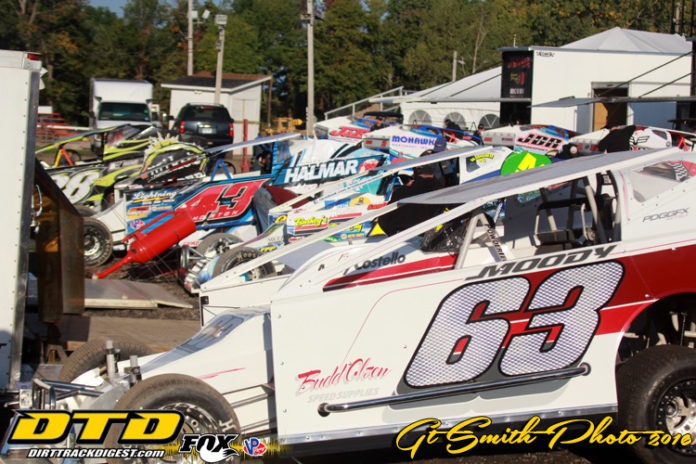 PLATTSBURGH- For the first time in twenty-six years, a full dirt racing schedule is slated for Airborne Park Speedway.

The 2017 season will feature two premier events along with a number of other high quality racing series and events.

The most anticipated for the season falls on Thursday, July 6, with the Super DIRTcar Series Big Block Modified Tour. The Mike Perrotte led series averaged 40 cars attempting to qualify for their events in 2016. Last season’s champion, Matt Sheppard is back contending with SDS, including other top runners Tim Fuller, Danny Johnson and Brett Hearn.

Saturday, June 10 will be Empire Super Sprints night. Drivers from both the United States and Canada are expected for this event. Steve Poirier was last season’s ESS champion.
Opening day will be on May 6 with a 7 P.M. post time. The 358 Modifieds will run a regular distance event for $2,000 to win. Also scheduled will be the Sportsman Modifieds, Renegades and Mini Mods.

Week number two will feature autograph night and the TUSA Mod Lites will be in town on May 20.


The Memorial Day celebration will occur on May 27 with the Canadian Pro Stock Series as the special on the racing card. Regular racing divisions will be in action that night.

Little League Night will be held on June 3. Two weeks later, the Rev Star Speed STR and Slingshot SR groups. Kids’ Night will wrap up the month of June on the twenty-fourth.
The Fourth of July Celebration will occur on July 1 this season, with fireworks and special details to be announced later.

Mid-Season Championships will be decided on July 8 for all regular racing divisions.
The remainder of July will see Volunteer Fire & EMS night on July 15, a week off for the Clinton County Fair on July 22 and Legend’s Night on July 29. The Dirt Modified Nostalgia Tour will be on hand for Legend’s Night.

August 5 is Law Enforcement Night, August 12 will have dump truck races, spectator races on August 19 and a Salute to Our Heroes (Military Night) will cap off the month.
September 2 will be a Labor Day Special and the final point counting event for the 358 Modifieds and Sportsman Modifieds.

The DIRTcar Pro Stock Series and a Sportsman special is scheduled for Sunday, September 10. The Rev Star Speed STR and Slingshot SR groups will be back again. More details on this event will follow.

September 24 will be the Leon Gonyo Memorial 358 Modified Special plus the DIRTcar Sportsman Series. The Sportsman Series averaged 48 cars attempting to qualify for each event last season.

The second annual Robin Branham Crash For Cancer Enduro will be on Saturday, September 30 with a rain date on Sunday. More details will be available for this event.
The final event of the season will be the $20,000 Demolition Derby on October 14 and 15 at the Clinton County Fair Grounds.

Regular season events will have a 7 P.M. post time and main gates will open at 5:30 for those races. Ticket prices for regular events will be $12 for adults, $3 for kids ages 6-14 and $25 for a family of two adults and two children.