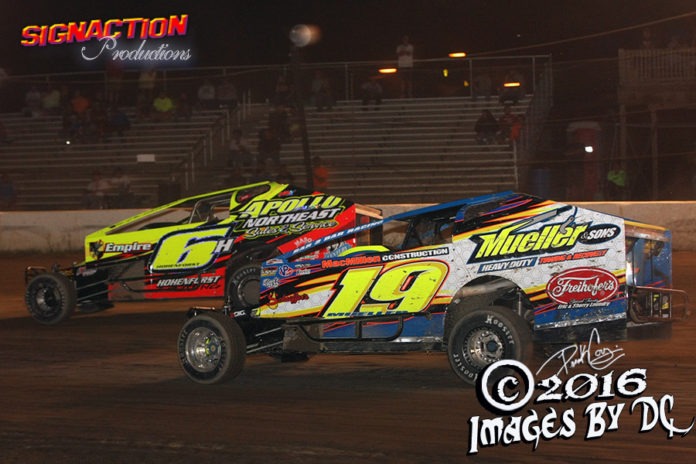 PLATTSBURGH, NY – Jessey Mueller will make his return to Airborne Park Speedway for the 2017 racing season. The Olmsteadville driver returns after spending the last two seasons racing in the Capital District.

Previously, Mueller participated in the 358-Modified division and 602-Sportsman division on the asphalt at Airborne where he was able to find some success. This season, he will return to Plattsburgh with a new Small Block 358-Modified. Mueller plans to run for the championship this season.

“I feel like we are at a point where we have the best equipment we’ve ever had,” Mueller said. “I have a lot of confidence here and love the high banking, it fits my style.”

In addition to Airborne, Mueller will return as a regular at the Albany-Saratoga Speedway (Malta) in Ballston Spa. He will also hit the road to follow the DIRTcar 358-Modified Tour. The tour will begin August 11 and continue through October 14. Stops on the tour include Autodrome Granby, Le RPM Speedway and Autodrome Drummond in Quebec, Ontario tracks, Cornwall Speedway and Brockville Speedway and Mohawk International Raceway, Can-Am Motorsports Park, Utica-Rome Speedway, Weedsport Speedway, Brewerton Speedway and Oswego Speedway.

The Super DIRTcar Big Block Modified Series is also on the schedule, on a part-time basis for Mueller Motorsports. Having already competed in the DIRTcar Nationals at the Volusia Speedway Park in Florida, he will hit some of the more local shows including the show at Airborne on Thursday, July 6 but he will not be a regular in that series.
Mueller points towards his last two seasons at Malta as a reason why he has become confident behind the wheel on dirt.


“They have some of the best drivers in the northeast and competing against them has only made me a better driver.”

Jessey added that the change in surface will provide a challenge to the Airborne asphalt regulars.

“Dirt racing is much harder than asphalt,” Mueller noted. “I learned that first hand in my first season at Malta.”

Sponsors are always an important part of racing and without good sponsors, this sport isn’t possible. Mueller noted that he has some returning and some new sponsors. Sheehan Construction, Big Al’s Sealcoating, Gioiosa’s Wine & Spirits and Eric and Sherry Laundry of Freihofers.

“The Small Block is a lot of fun to drive and I love the facility, I’m looking forward to Airborne in 2017.”

The racing season kicks off on May 6 with a 7 P.M. post time. For more information and to stay up to date, visit airborneparkspeedway.com or Facebook at Airborne Park Speedway.