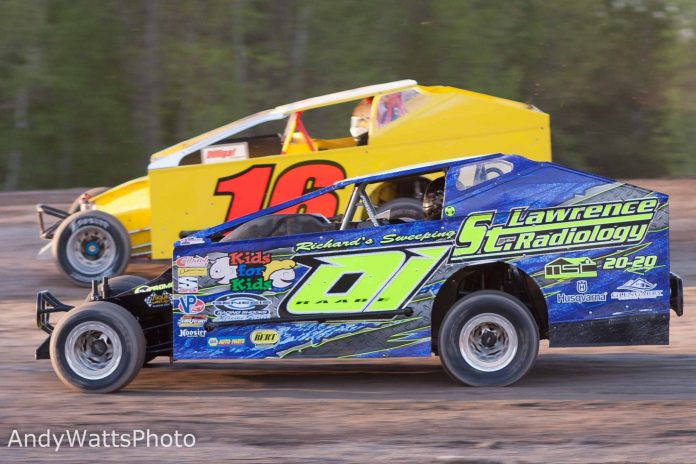 Raabe drove from the seventh spot to third in the heat race and started sixth in the feature event.

A lap-22 restart pinned Middlebury, Vermont’s Todd Stone aside Raabe’s number St. Lawrence Radiation 01. Raabe, the leader, had lane selection and chose the top of the track. Stone hung around for one lap on the inside the top proved to be the right decision as Raabe went on to win convincingly. Stone finished second with Cornwall, Ontario’s Gage Morin finishing in third. Positions four and five went to Greg Atkins and Jessey Mueller, respectively.

It was a slow start to the Fidelis Care Sportsman feature with two red flags in the first four laps.


While all this was happening in the middle of the pack, Moise Page was picking cars off on the extreme outside. Page worked his way around Johnny Scarborough after the two battled side by side on several restarts. Page, of St. Louis de Gonzague, Quebec picked up win number one in the 25 lap event. Scarborough settled for second with positions three through five going to Connor Cleveland, Bucko Branham and Lonnie Rivers.

Brent Jarvis was able to rebound from a lap-4 spin and take the victory in the Poirier’s True Value Renegade feature. Michael Wright and Keith O’Neil finished second and third.

Josh LaPorte of Peru was the winner in the Busch Beer Mini Mod division. Roger LaBounty and Tyler Irwin rounded out the top three.

Racing actions resumes at Airborne on May 27 with all five of the regular racing divisions on tap. Post time for that event is 7 p.m