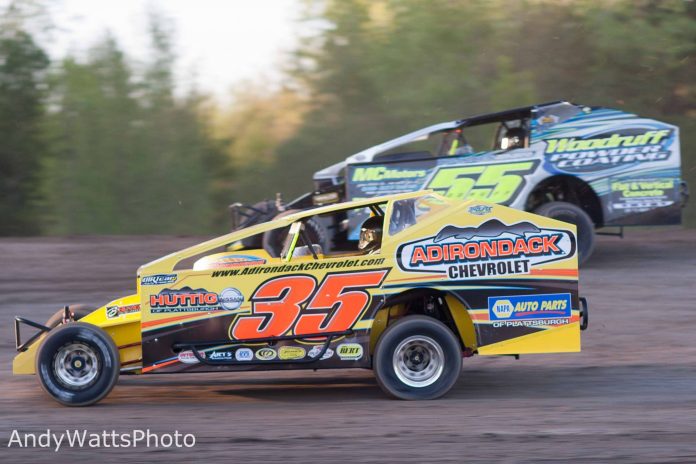 PLATTSBURGH, NY – Mike Perrotte had nothing but bad luck to start out the 2017 racing season at Airborne Park Speedway. That changed Saturday night.

The racing veteran from Plattsburgh drove his Adirondack Auto No. 35 to victory lane as head led every lap of the Egglefield Ford 358-Modified 30 lap feature.

Perrotte ran up on heavy lap traffic on lap-26 but methodically executed his way through the slower cars. Gage Morin of Cornwall, ON pulled even in turns three and four on the final lap, but could not complete the slide job underneath. Morin would finish second. St. Hyacinth, PQ driver Steve Bernier finished in third. Chris Raabe and Patrick Dupree completed the top five.

“It’s always good when you win,” Perrotte said. “We have a lot of good drivers here, so its really something to finish ahead of them.”

Pagé took the lead from Mooers’ Jamy Begor on lap-21.

Begor had the lead on a lap-14 restart and was able to vault off turn two to stay ahead. Pagé was patient and waited for Begor to slip up and he did on lap-21, allowing Pagé to drive through.

“I knew I had a good car and just waited for the 19 to make a mistake,” Pagé said. “This track was smooth and the car would go wherever I put it.”

Brent Jarvis scored a hat trick as he is now three for three in the Poirier’s True Value Renegade division. Keith O’Neil and Jay LaGrave finished in second and third, respectively.

Racing action resumes next Saturday night when Northline Utilities presents the Lucas Oil Empire Super Sprints. Racing gets underway at 7 p.m. For more details and to stay up to date, visit airborneparkspeedway.com.