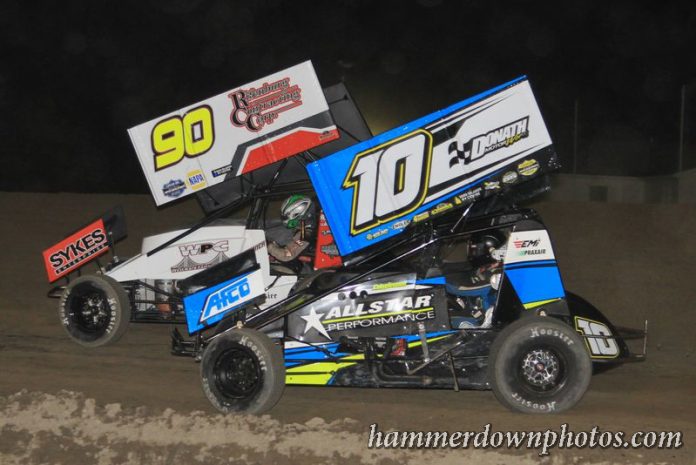 PLATTSBURGH, NY – Matt Tanner has had a tough start to the 2017 season.  The Stephentown, N.Y., driver destroyed a car in his first event of the season which put his team behind right from the get go.  They struggled the next few races as they tried to rebound from the bad luck.  A new car seemed to be the remedy and on Saturday night he got the ultimate bounce back.

Tanner led every lap of the 25-lap A-Main at the Airborne Park Speedway to become the first driver to park in Victory Lane with the Lucas Oil Empire Super Sprints since 1988.  Tanner earned over $2,000 for his triumph in the NAPA Auto Parts Tour of the U.S. feature.

“The way the year has been going, it’s absolutely been horrible,” said Tanner.  “We broke out a new car last night and it’s been good every time we hit the track.  I don’t think we had the best car tonight but the track definitely helped us.”

Tanner was fortunate to draw the pole starting position for the feature.  He was flanked by Brandon Kidd for the green flag at the start of the race.  Tanner bolted to the lead off of turn four while Kidd hung with him on the outside of the speedway.

Colagiovanni got an opening on lap nine as Tanner bobbled getting through turns one and two.  Tanner missed the bottom and Colagiovanni drove on by.  Unfortunately for Colagiovanni, a caution for a spinning car in turn four negated the pass.

“I knew Paulie was there, I could hear him the whole time,” commented Tanner.  “I just tried to not make a mistake and I think that was the only one I made.  Luckily the caution came out.”

With a little luck on his side, Tanner took back control of the feature as field got back on the throttle again.  Just like the initial start, Tanner was able to hold off the challenges of Colagiovanni.  He moved up a lane around the speedway before ending up back on the extreme inside of the speedway.

Seven laps were left when Tanner found traffic another time.  He was patient this time, waiting for the right opportunity to make his moves.  His patience allowed Colagiovanni to move closer again.  Colagiovanni got to his back bumper with only five laps to go.

“I was just trying to keep track of where the lapped cars were going,” he said.  “There was one kind of running the middle then one high and they moved down.  I didn’t want to come off the bottom because I knew Paulie would fill the gap there.  I was just biding my time and make him go around the outside if he had to.”

Colagiovanni pressured Tanner as much as he could in the final handful of laps, to no avail, as it was Tanner earning his first win of the 2017 season and the sixth of career.

Teenager Colagiovanni was all smiles afterwards even though he didn’t win.  He’s seen some tough luck like Tanner the last few races as he crashed while in Quebec last weekend.  Although disappointed his pass for the lead got taken away, he was pleased to get a runner-up spot at the checkered flag.

“I was following him pretty much the whole race,” cited Colagiovanni about the battle with Tanner.  “He was running the middle to high so I went low, low, low every lap and then I got him.  Then the yellow came out.  I was a little bummed when the yellow came out but on the restart I was thinking maybe I could him high on the restart.  I didn’t.  It was good, clean racing with him.”

Jeff Cook watched a mechanical failure take away a podium finish on Friday night so a third place run was a nice way to end the weekend.  The Antwerp, N.Y., driver was strong all race long coming from fifth to get third in the near caution free event.

“The car wasn’t too bad tonight,” stated Cook.  “We just needed a little bit more off the corner.  We’ll take a third.  Tonight I needed to stay back and see what was going to happen up front.”

Steve Poirier advanced from the seventh starting position to grab fourth with Paul Kinney working the bottom to come from ninth to finish in fifth.