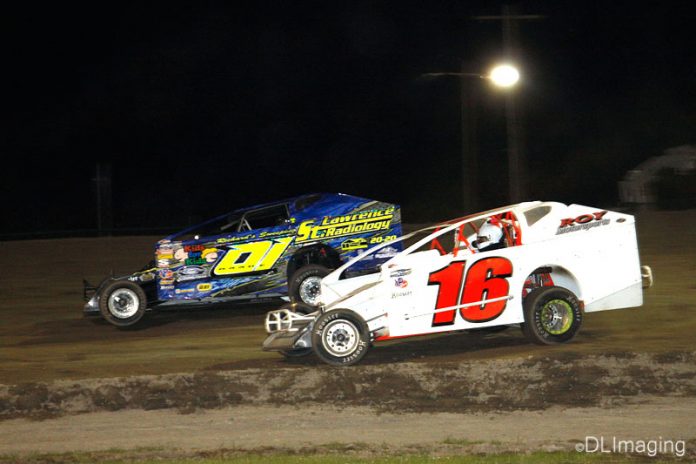 PLATTSBURGH, NY – The Canadian drivers have had a strong start to start the 2017 season division at Airborne Park Speedway.

Cornwall, ON driver Gage Morin picked up his first win and made it the fourth win for a Canadian driver in the Egglefield Ford 358 Modified division. Morin joins fellow Canadian competitor Chris Raabe, who has three wins and Plattsburgh driver Mike Perrotte with one. Morin took the lead on lap-19 in turns one and two as he dove underneath Kayle Robidoux to complete the pass. Morin pulled away in the final 10 laps, never looking back.  “I didn’t want to show Kayle the the nose of the car and have him move down, so I decided to just power through on the inside,” Morin said.

Perrotte hustled through the field, making up ground on the inside to finish second. Raabe settled for third, with Robidoux and Todd Stone rounding out the top five.

“The car was hooked up tonight, a lot of credit goes to the team,” Morin added.

The Fidelis Care Sportsman division ran a 25 lap feature with a repeat winner collecting the checkered flag.  St. Louis de Gonzague, PQ driver Moïse Pagé won for the third time this season. Pagé worked to the front of the field early in the event before passing Gabriel Cyr on the outside in turns three and four.

Brent Jarvis kept his winning streak alive in the Poirier’s True Value Renegade division. Jarvis made it a perfect five for five with the win on Saturday. Jimmy Bushey and Metal Man completed the top three.

Racing action resumes next Saturday with a 7 p.m. post time. It will be kids night at the speedway and you will want to be sure to get the kids there early for some giveaways. Gates will open at

5 p.m. For more information and to stay up to date visit airborneparkspeedway.com or on Facebook at