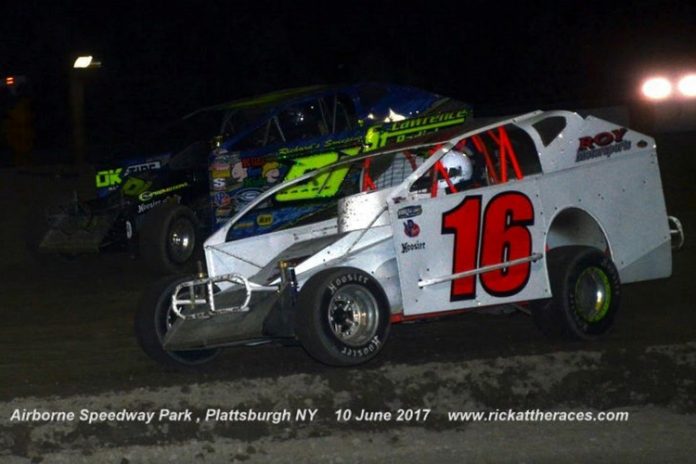 PLATTSBURGH, NY – Another Saturday night of short track racing action is on tap at Airborne Park Speedway. Racing action resumes at 7 p.m. with the Egglefield Ford 358-Modifieds, Fidelis Care Sportsman, Poirier’s True Value Renegades, Busch Beer Mini-Mods and Strictly Stocks all in action for Cumberland 12 Cinemas Kids’ Night presented by Sweet Frog.
Race car rides will take place for kids during the intermission portion of the program. In addition, we will have Cumberland 12 Cinemas and Sweet Frog giveaways throughout the night.

Grandstand gates will open at 5 p.m. Admission prices are $12 for adults with kids ages 12 and under free of charge.

Last week, the Canadian drivers continued a strong start to the 2017 season.
Cornwall, ON driver Gage Morin picked up his first win and made it the fourth win for a Canadian driver in the Egglefield Ford 358 Modified division. Morin joins fellow Canadian competitor Chris Raabe, who has three wins and Plattsburgh driver Mike Perrotte with one.
Morin took the lead on lap-19 in turns one and two as he dove underneath Kayle Robidoux to complete the pass. Morin pulled away in the final 10 laps, never looking back.

“I didn’t want to show Kayle the the nose of the car and have him move down, so I decided to just power through on the inside,” Morin said.

Perrotte hustled through the field, making up ground on the inside to finish second. Raabe settled for third, with Robidoux and Todd Stone rounding out the top five.

“The car was hooked up tonight, a lot of credit goes to the team,” Morin added.
The Fidelis Care Sportsman division ran a 25 lap feature with a repeat winner collecting the checkered flag.

St. Louis de Gonzague, PQ driver Moïse Pagé won for the third time this season. Pagé worked to the front of the field early in the event before passing Gabriel Cyr on the outside in turns three and four.

“The track was a little rough for our cars, but it was a great track,” Blanchet said.

Blanchet has been driving with the STR’s for the past four seasons and also drives a Lightning Sprint in the summertime. At just 21 years old, Blanchet is a fine young talent.

Brent Jarvis kept his winning streak alive in the Poirier’s True Value Renegade division. Jarvis made it a perfect five for five with the win on Saturday. Jimmy Bushey and Metal Man completed the top three.