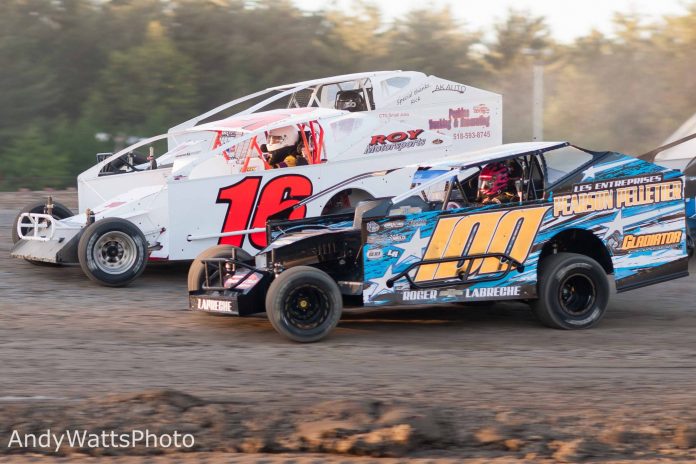 The Egglefield Ford 358-Modifieds, Fidelis Care Sportsman, Poirier’s True Value Renegades, Busch Beer Mini-Mods and Strictly Stocks will all be in action with a fireworks show to cap off the night.

Admission to the event will be $15 for adults, with kids ages 12 and under free of charge. Grandstands will open at 5 p.m. with the first green flag at 7 p.m. Car loads will be accepted to watch the fireworks for $20 starting at 8:30 p.m.

24 machines signed into the garage area for the Modified division last weekend.
Morin took the lead on lap-5 and never looked back. A lap-22 yellow flag setup a restart with first time visitor, François Berniér, along side. Morin nailed the start and drove home to victory. Berniér finished second with point leader Chris Raabe, Jake Scarborough and Mike Perrotte finishing in spots three through five.

The Fidelis Care Sportsman division saw a season high car count, with 36 cars attempting to qualify. At the end of the 25 lap feature it was Brandon, VT driver Joey Scarborough collecting the checkers in victory lane.

Brent Jarvis continued his dominance in the Poirier’s True Value Renegade division. Jarvis scored his sixth win making him a perfect six for six on the season. Jimmy Bushey and Mark Caron completed the top three.

Kris Clark collected his second win in as many attempts in the Busch Beer Mini-Mod division.

The Strictly Stock division found Michael Daniels in the winners circle for the third time this season. Shawn Walker and Nathan Smart completed the top three.

For more information and to stay up to date, visit airborneparkspeedway.com or on Facebook at Airborne Park Speedway.