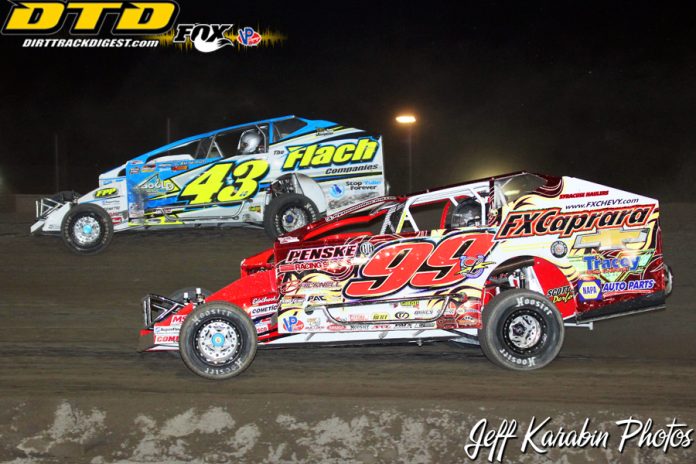 PLATTSBURGH, NY – Larry Wight displayed a dominating performance in the Super DIRTcar Series first-ever visit to Airborne Park Speedway on Thursday night. Wight became the race’s fourth leader when he took the lead from Keith Flach on a lap 31 restart and then dominated the final 69 circuits to earn his first Super DIRTcar Series win of the season.

Wight lapped all but the top-five finishers, which included runner-up Max McLaughlin, Jimmy Phelps, Tim Fuller and Pat Ward, on the way to his third career Series win and first since September 11, 2015 at Quebec’s Autodrome Granby. The victory was especially impressive for Wight given he was racing in a backup No.99L car after his primary ride was destroyed in a wreck last Sunday at Utica-Rome Speedway.

“After everything we’ve been going through trying to get this backup car to where our primary car was, it was a big thrash by Scott to get it ready,” Wight said in Victory Lane. “We struggled a little bit at the beginning of the night figuring out a couple of bugs with it, but by the end of the night we got it dialed in.”

Local driver Matt Woodruff, a weekly competitor at Airborne, started on the pole with Billy Decker to his outside for the 100-lap Feature. Woodruff led the opening seven laps until Decker found his way to the point on lap eight via the bottom lane in turn one.

Decker paced the field for a short while until Ravena, NY native Keith Flach, who had lined up fourth on the starting grid, found the outside lane to his liking and grabbed the top spot from Decker on lap 14. Flach was able to pace open a half-second lead as Wight fought to take second from Decker on lap 16.

Wight made his challenge for the lead on lap 20, but Flach held the momentum in the top groove of the track and maintained the lead. The first caution of the race came on lap 26 for a slowed Brandon Walters and when the race restarted on lap 31, Wight made what proved to be the race-winning move when he drove around the outside of Flach to seize the lead while Decker followed suit to take second.

Over the final 69 laps, Wight led Decker by as much as 3.8 seconds, which equated to a full straightaway. Decker held the runner-up spot through the battles in traffic and was well ahead of a spirited third-place joust between Max McLaughlin, Jimmy Phelps and Brett Hearn.

“This place kind of raced like Utica-Rome around the top,” said Wight, who raced the outside lane in turns three and four all night long. “I’ve flirted with the edge there enough to know where you can get it and where you can’t.”

Decker’s night came to an abrupt end, however, when he fell off the pace and pulled into the infield with just four laps to go while running second. As a result, Decker received the Speedy First Aid Hard Luck Award.

The caution waved one lap following Decker’s misfortune when Brett Hearn came to a stop at the top of turn two. That yellow flag setup a restart with three laps to go and gave McLaughlin one final shot at a win. Wight got a perfect jump on the single-file restart to foil any of McLaughlin’s hopes of claiming a VP Racing Fuels checkered flag.

“I was trying to slow him down, hoping he would stumble on that start and give me a little bit of a jump,” Wight said of his strategy. “I was just hoping my right-rear didn’t seal over on me. Max was doing everything, but saving his right-rear, so I was hoping he wouldn’t roll the bottom. Everything just worked out right.”

McLaughlin threw everything he had at Wight on the restart, but couldn’t find enough grip at the top of turns one and two, where the bottom had become the preferred groove, to create a drag race down the backstretch into turn three. Regardless, the second-place tally marks McLaughlin’s best finish of the season with the Series and is his second top-five of the year.

“I can’t be upset with another second-place finish,” McLaughlin said. “He was just a little better through one and two. He could keep it a little lower than I could. I was just a little loose, but all in all we had a great car again. These cars have been phenomenal all year with the new Teo (chassis).”

Decker was the Pole Position Raceway Fast Qualifier award winner when he set quick time with a lap of 16.467 seconds. Decker was also a heat winner along with Tim Fuller and Mike Maresca. McLaughlin nearly became the first driver to claim the 811 Dig Safely New York Redraw Bonus after starting from the 11th position. Hearn was the other driver eligible for the bonus as the 8th starter.