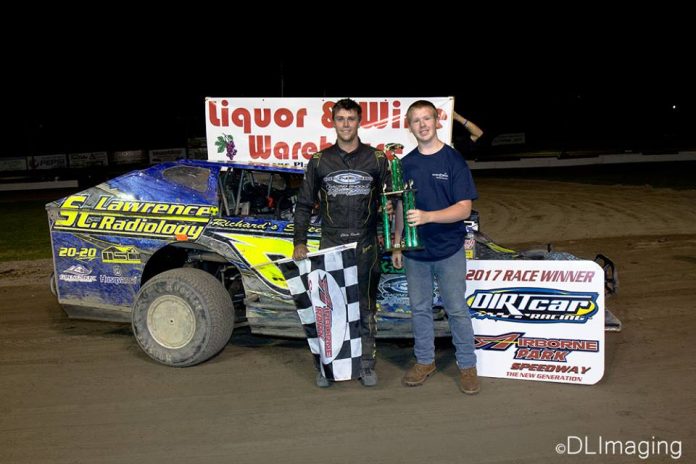 Todd Stone of Middlebury, VT started on the pole and led the first 28 laps of the main event.  Stone had to choose a lane to work around a lap car while coming to take the white flag and his choice of the outside lane came back to bite him as Raabe powered underneath off turn four. Raabe would pull away to a six car length victory on lap-30.

“You have to be at it a long time to be able to get to 150 wins,” Raabe said. “I have a great group of guys that have been with me all the way.”

At the beginning of the 2017 racing season the Raabe racing team set out for the “Drive For 150” and it has been checked off their list as of July 16.


Stone held on for the second spot. Greg Atkins’ third place finish was his best finish of the season. Mike Perrotte and Jessey Mueller completed the top five.

A first time winner checked into victory lane in the Fidelis Care Sportsman division. Jamie LaFountain of Keeseville took the lead early and never looked back in dominating fashion. Lonnie Rivers finished a season best second place with his No. R7 machine.

Connor Cleveland continued to flash his speed and skill as he worked from starting position 15 to a third place finish. Thomas Cook and Nick Heywood completed the top five.

The Poirier’s True Value Renegade division went through a number of right rear tires and Brent Jarvis found himself in the right spot at the right time. Jarvis was sitting in third place with two laps to go when first place car, Jimmy Bushey and second place car Chris Murray both had flat tires. Jarvis would drive on to his seventh win of the season.

Along with our regular racing winners was the Make-A- Wish foundation. Liquor & Wine Warehouse along with Sportsman driver Codie Aubin, arranged for Benjamin from Jay to be a part of the night and he threw the green flag for Aubin’s heat race and the Sportsman feature.

During the intermission drivers walked through the grandstands and collected money via a helmet pass. In total, $1,245 was collected from the grandstands. The Carpenter family of Liquor & Wine

Warehouse threw in $400 and Airborne Park Speedway rounded the total up to an even $2,000.

In addition, Liquor & Wine Warehouse threw out over 200 numbered t-shirts and they drew a number for a 100 bill. A random finishing position was drawn for each of the five regular racing divisions with the driver finishing in the position also receiving a 100 bill. Matt Woodruff, Jamy Begor, Metal Man,

Sheppard and Kilburn were recipients of the $100.

Racing action pauses this weekend as the Clinton County Fair is in town. Action resumes on July 29 for Airborne Legends Night. For more information and to stay up to date, visit