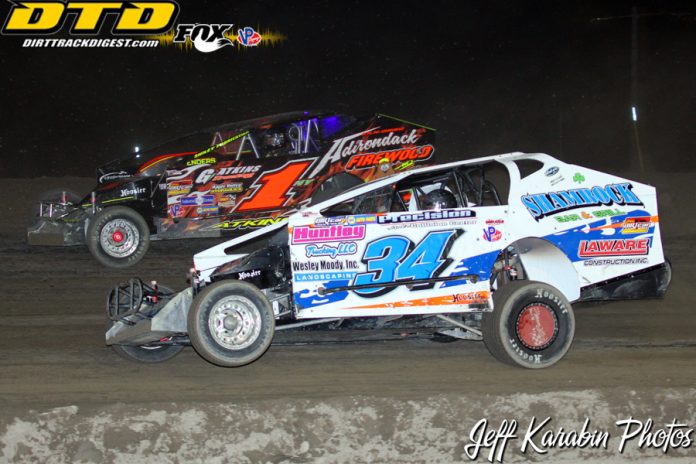 PLATTSBURGH, NY – Airborne Park Speedway rolls back the clock this weekend as the drivers of the past will be on hand for a full card of racing on Airborne Legends Night presented by Casella Waste Management.

Bobby and Beaver Dragon highlight some of the former drivers that will be in attendance this Saturday. Also expected, Dave Dion, Wes (Slugger) Moody, Joe Thomas, Bob Brunell, Bill Fountain and many more.

Racing action gets underway at 7 p.m. for the Egglefield Ford 358 Modifieds, Fidelis Care Sportsman, Poirier’s True Value Renegades, Busch Beer Mini-Mods and Strictly Stocks. Grandstands open at 5 p.m. with admission prices set at $12 for adults and kids ages 12 and under free of charge.

Todd Stone of Middlebury, VT started on the pole and led the first 28 laps of the main event. Stone had to choose a lane to work around a lap car while coming to take the white flag and his choice of the outside lane came back to bite him as Raabe powered underneath off turn four. Raabe would pull away to a six car length victory on lap-30.


At the beginning of the 2017 racing season the Raabe racing team set out for the “Drive For 150” and it has been checked off their list as of July 16.

Stone held on for the second spot. Greg Atkins’ third place finish was his best finish of the season. Mike Perrotte and Jessey Mueller completed the top five.

A first time winner checked into victory lane in the Fidelis Care Sportsman division. Jamie LaFountain of Keeseville took the lead early and never looked back in dominating fashion. Lonnie Rivers finished a season best second place with his No. R7 machine.

Connor Cleveland continued to flash his speed and skill as he worked from starting position 15 to a third place finish. Thomas Cook and Nick Heywood completed the top five.

The Poirier’s True Value Renegade division went through a number of right rear tires and Brent Jarvis found himself in the right spot at the right time. Jarvis was sitting in third place with two laps to go when first place car, Jimmy Bushey and second place car Chris Murray both had flat tires. Jarvis would drive on to his seventh win of the season.