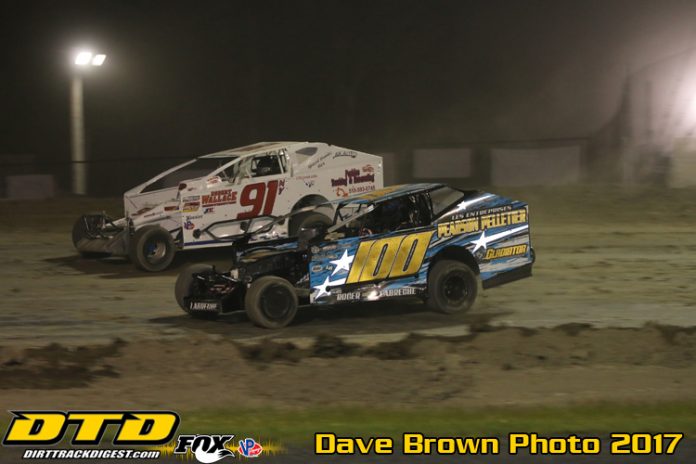 Labreche took advantage of a good handicap starting position and led every lap of the 30-lap feature event. Mike Perrotte of Plattsburgh was closing in the last couple laps, but ran out of time as Labreche crossed the line with a three-car length advantage. Through the first 15 laps of the race, Labreche was setting the fastest lap times, which allowed him to pull out to a 15-car length advantage. His early race speed set him up in position to have enough to pull off his first win.

“The car was awesome tonight,” Labreche said. “I have to thank the 29 Sportsman team for helping us out tonight.”

Another first-time winner found victory lane in the Fidelis Care Sportsman division. Lonnie Rivers of Plattsburgh followed up his most recent second place finish with a first-place finish.


Rivers led all 25 laps of the feature event, but things got congested on lap-20 when Rivers worked into lap traffic. Mooers driver, Jamy Begor, had two looks underneath in the final 5 laps, but lap cars broke his momentum and he had to settle for second place.

Brent Jarvis continued his dominance in the Poirier’s True Value Renegade division. Jarvis is now a perfect 8 for 8 on the season. Michael Wright and Jimmy Bushey completed the top three.

Kris Clark collected his fourth win of the season in the Busch Beer Mini-Mod division as he was able to make the winning pass on Mike Whalen off of turn 2. Whalen and Roger LaBounty completed the top three.

The Strictly Stock “Rookie division” saw Rolland Guay collect his second win of 2017. Jay Sprano finished second in his first time out and Shawn Walker crossed the line in third.

The Legends were honored during the intermission portion of the racing card. A number of drivers from the beginning of the speedway’s history up through the 2000’s were honored and treated to a barbeque and a night out at the races.