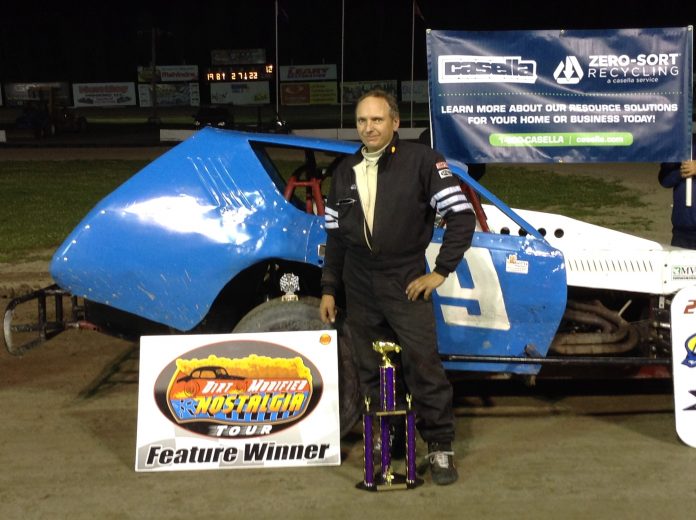 PLATTSBURGH, NY – The all new Dirt Modified Nostalgia Tour series made it’s way to the Airborne Park Speedway in Plattsburgh, NY this past Saturday as part of it’s Legends Night and saw two new winners in each division.

Paul Pekkonen from Brockville, On would jump out to the lead immediately from his pole starting position and cruise to victory in the 12 lap affair. Lyn, On native Tyler Reynolds would give chase with Kingston, Ontario’s John Stanley in tow. Mahopac, NY’s Rob Casti would make some early moves on Stanley in the early part of the race but would have to settle for fourth. Matt Larrivee of Forrest Port, NY would round out the fast five but win the Nostalgia division over Tim Hegarty of Kingston, On.

The series moves on to Paradise Speedway in Geneva, NY next Saturday, August 5th.

Pit notes…Larrivee would take the Hard Charger, Maintenance Award and the lions share of the Nostalgia purse money for $135.00…Pekkonen would walk away with $205.00 in purse and lap money…Rob Casti towing six hours plus to make the show…Modified driver Chris Cayea behind the wheel of the 5 7/8 machine for the heat, his night would end with a broken shock…Pekkonen beating Reynolds by a wheel at the flag to take the heat win.