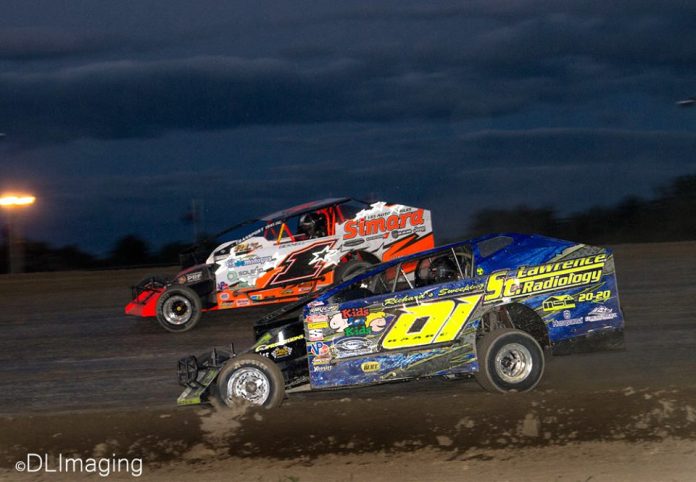 Steve Bernier took the lead on lap-4 and led until a lap-15 yellow flag for Jake Scarborough’s spin in turn one. Bernier would select the outside lane to restart next to Raabe. On the restart Raabe would pull to the lead, only to have Bernier make contact with him in turn two that would send Raabe’s No. 01 machine around. Raabe, however was able to keep the car rolling and continued in the seventh position.

The yellow flag flew again on lap-26 and Raabe had rallied to the second spot, awaiting an
opportunity to get back at Bernier. Bernier elected to restart on the inside, but Raabe aced the restart and drove home to the victory.

“He definitely got my attention there in turn 2,” Raabe said. “I think it fired me up enough to get back in a position to challenge for the win.”  Bernier would finish second with Todd Stone coming home third. Greg Atkins and Simon Perrault completed the top five.

The Fidelis Care Sportsman point leader, Connor Cleveland, found victory lane for the second time in 2017. Cleveland drove from position twelve on the starting grid to the top spot.  Chris Cayea led the opening laps of the race before Cleveland would eventually run him down on lap-10. In his progress to the front, Cleveland made two exceptional moves to put him in position to win. One move was three-wide on the cushion out of turn four and the other was a four-wide move in which he was able to slice through the middle of turn two.


“I saw Moïse had a good run on the bottom and I knew I needed to get to the front and make sure he didn’t run away.” Cleveland explained in victory lane. Moïse Pagé would settle for second with Joey Scarborough finishing third. Nick Heywood rallied from an early spin to finish fourth. Apparent fifth place finished, Adam Gage was disqualified following post-race technical inspection for an ignition infraction. Bucko Branham was placed fifth.

Kris Clark continued his dominance in the Busch Beer Mini-Mod division by scoring his fifth win of the season. Michael Whalen and Roger LaBounty finished second and third, respectively.