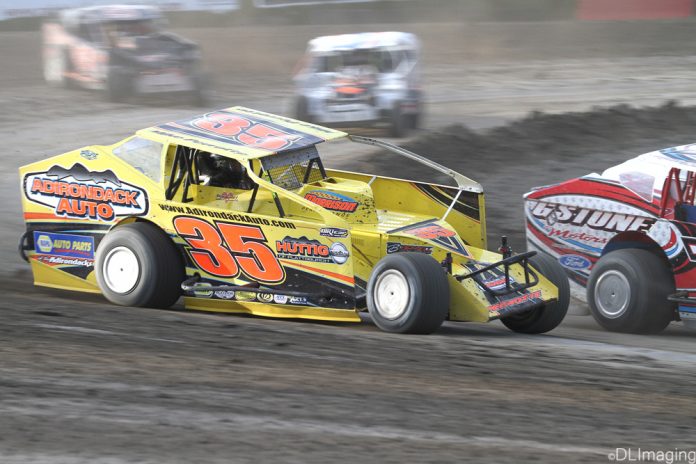 PLATTSBURGH, NY – Local racing veteran, Mike Perrotte, made a thrilling pass on the outside of turn 4 on lap-20 to set himself up for his second Egglefield Ford 358 Modified win of the season at Airborne Park Speedway.

Gage Morin took the lead on the opening green flag of the 30 lap feature. The lead was short lived as Perrotte would slide under on lap-5. Nick Lussier would spin on lap-12, setting up a restart with Perrotte and Morin in the front row, with Steve Bernier and Chris Raabe in row two. Perrotte elected to restart outside and it nearly proved to be costly as Morin slid up in front of Perrotte in turns one and two, which left the bottom open for Bernier. Perrotte, however, would power off turn two and split the two cars to keep his lead.
Morin had mechanical troubles on lap 14, just after Bernier got around Perrotte for the race lead.

Bernier restarted from the inside and pulled out to an eight car length advantage. Perrotte took his Adirondack Auto No. 35 to the outside on lap-19 and quickly closed on Bernier. On lap-20, Perrotte would time his pass perfectly and was able to draw away from Bernier.
In the closing laps, Steve’s brother, François Bernier, drew to within three car lengths, but Perrotte expertly executed lap traffic and went on his way to the win.

“I knew I needed to time it right to make the pass on Bernier,” Perrotte said. “It was a lot of fun out here tonight.”


A first-time winner found victory lane in the Fidelis Care Sportsman division. Danny Sullivan of Morrisonville led flag to flag, but it wasn’t smooth sailing for the No. 3 machine.
Sullivan worked up on heavy lap traffic on lap-15 and had to methodically work his way around. In doing so, Sullivan would increase his lead on the field as he picked his spots well and went on for the win.

“You have no idea how much this win means for me,” Sullivan said. “To top it off, we got it done on a night that two of my sponsors are presenting the race.”

Nick Heywood crossed the line in second with Chris Cayea finishing in third. Joey Scarborough and Connor Cleveland completed the top five with Cleveland driving from last to fifth after pitting for a flat tire on lap-1.

Brent Jarvis continued to show his dominance in the Poirier’s True Value Renegade division. Jarvis used the inside of the racing surface to drive his car to his ninth win. Mark Caron, Michael Wright, Eric Messier and Tylor Terry completed positions two through five.

The Busch Beer Mini-Mods found Kris Clark atop the division while winning his sixth race of the season. Josh LaPorte and John Bradley completed the podium. Ian Bressette and Clem Bell finished fourth and fifth, respectively.

Shawn Walker turned Rolland Guay’s bad luck into good luck, as he was able to collect his third win. Guay was leading on the final lap when he broke on the right front in turn two and opened the door for Walker. Nathan Smart, Michael Daniels, Guay and Mark Lapan completed the top five.

The Spectator Race event was won by Chris Rombaugh of Fulton, as he defeated Jerry Racette. The Dump Truck Race victory went to Josh Laware.

In total, 80 backpacks were given away to kids during the intermission portion of the night. Special thanks to Billie Jo Branham, all the drivers, fans and staff that contributed to make the event a success.

Racing action resumes next Saturday for McBride Chevrolet & Subaru Salute to Our Heroes Night presented by John W. Sheehan and Sons Excavation. Fireworks will be on the card in addition to the five regular racing divisions. For more information, visit airborneparkspeedway.com or on Facebook at Airborne Park Speedway