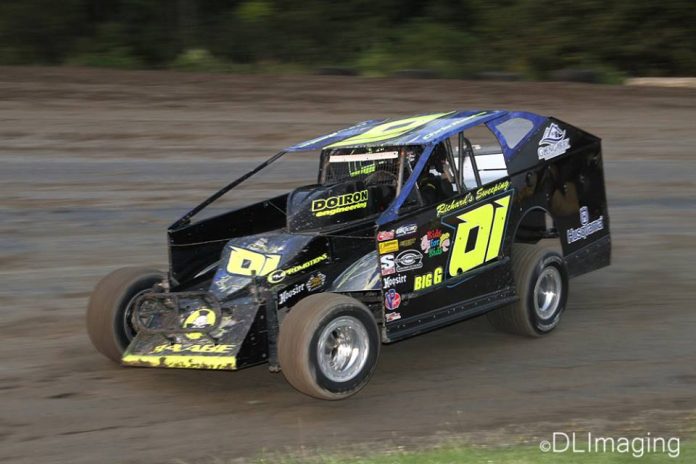 Fellow Ontario competitor Gage Morin started on the pole and led the first 10 laps of the
Egglefield Ford Modified feature. On lap-11, Raabe would work underneath Morin and pull out to a comfortable lead.

Multiple late race restarts tested Raabe, including a lap-27 restart with Mario Clair along side.  Raabe used the inside lane in turns one and two to propel his No. 01 machine to victory. “I thought the car might’ve been going away a little bit at the end,” Raabe said. “Were looking forward to the 50-lap, $2,000 to win race next weekend.”

Clair crossed the line in second with Morin completing the podium. Mike Perrotte and George Foley completed the top five.

Unofficially, Chris Raabe has locked up the 2017 DIRTcar Modified point championship with his finish Saturday night.


The Fidelis Care Sportsman 25-lap feature crowned a first-time winner in victory lane. Thomas Cook of Hogansburg made a mid-race pass of Bucko Branham in turn two and never looked back. The win marked the first of his career at Airborne.

Branham held of a strong late charge from Moïse Pagé to finish in the second spot. Zack Daniels had a season-best fourth place finish, with Codie Aubin rounding out the top five.
Divisional point leader, Connor Cleveland came into the night with a 46-point lead over five-time defending champion, Nick Heywood. Cleveland finished the night in the seventh position, while Heywood struggled with a fifteenth place finish. Cleveland now unofficially has a 62-point lead and is the 2017 DIRTcar Sportsman champion.

Racing action resumes next weekend with the DIRTcar Championships presented by P.M. Leary Restoration. The Modifieds will run a 50-lap feature for $2,000 to win and $200 to start. For more information visit airborneparkspeedway.com or on Facebook at Airborne Park Speedway.