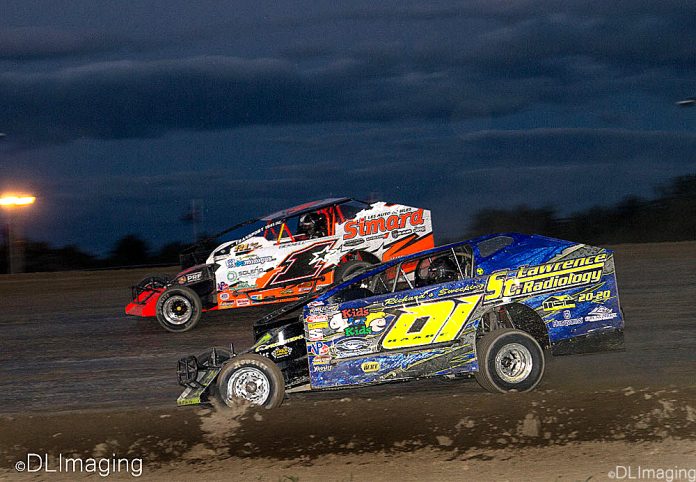 PLATTSBURGH, NY – Chris Raabe of Alexandria, Ontario collected his 150th career open wheel modified win at Airborne Park Speedway in Plattsburgh. It was the fourth win of the season for Raabe who has been the 358 Modified point leader since opening day.

It all started at a young age for Chris Raabe. Back in 2005 at the age of 14, he broke into the record books by becoming the first 14-year-old to collect a DIRTcar sanctioned open wheel modified win. Just a year later, he became the youngest track champion in DIRTcar history at the age of 15. Raabe would collect 7 wins that season to go along with his Brockville Speedway Sportsman championship.

Raabe would continue to make his way into the DIRTcar record books at age 17, where he became the youngest Mr. DIRTcar Series champion. Three Sportsman track championships and 22 wins helped him to be selected as the “Dirt Track Digest Driver of the Year” and the “Inside Track Magazine Canadian DIRT Driver of the Year” in 2008.

2009 and 2010 were the final seasons that Raabe would run full-time in a Sportsman. Over that time he would collect 51 feature victories, a second Mr. DIRTcar Series championship, 4 track championships, and established the all-time single season win record for a Sportsman at age 19. To close out the 2010 season, Raabe hopped into a 358 Modified and won at Syracuse in the 358 Futures Race. The win would put Raabe in a 358 full-time for the following season.

The full-time 358 Modified campaign began for Raabe in 2011. In just the first season, he collected the Mohawk International Raceway track championship and was the Rookie of the Year at Mohawk and for the Mr. DIRTcar 358 Series.


During the 2012 season, Big Block Modifieds would come into play and Raabe would win track championships at Can Am Speedway. He collected 11 wins against the Big Blocks, with one of them being a Super DIRTcar Series win at Cornwall Motor Speedway. During that season, Raabe also claimed 5 358 Modified wins between Cornwall and Mohawk.

Raabe found a Saturday night home in Quebec in 2013 at Le RPM Speedway in Saint-Marcel-de-Richelieu. He collected a track championship in his first season. In addition, Raabe tried his hand at dirt modified racing on the asphalt. Three wins at the Evans Mills Speedway helped prove that Raabe was the real deal regardless of the surface.

The 2015 season found a mix of both dirt and asphalt racing. Raabe collected 10 wins in his 358 Modified across five tracks. 7 of the wins came on the dirt, while 3 wins were on asphalt at Autodrome St-Eustache. Included in the 2015 total was a DIRTcar 358 Series victory at Mohawk.

A strong 2015 gave promise for 2016 and the results showed. A Mr. DIRTcar 358 Series Championship and a Mr. DIRTcar Central Region Championship kept all eyes on Raabe. At the Cornwall Motor Speedway, he would be crowned the 358 Modified champion and the Doiron Cup champion that same year. He had all that success in a consistent season with just 6 victories.

A good racer can’t do this all by himself. On numerous occasions, Chris complemented his crew and sponsors and highlighted them as the reason why their program has had so much success. Genesis Racing Shocks, Kids For Kids, Mike Sauve Construction, Glengarry Windows & Doors, St. Lawrence Radiology and Richard’s Sweeping are among some of the sponsors that have been with Raabe since the beginning.

Looking back at what is just the beginning of the racing career for Raabe, we find Raabe at 150 wins at 14 different tracks. During that span 22 track championships and series championships put an exclamation point on the chase to 150. After reviewing the statistics, one thing is clear. Chris Raabe can wheel a race car. This is a driver you’ll want to follow moving forward. His cool and calm demeanor is a unique characteristic for a driver of his caliber. The chase for 150 is over and it’s time for a new one to begin.