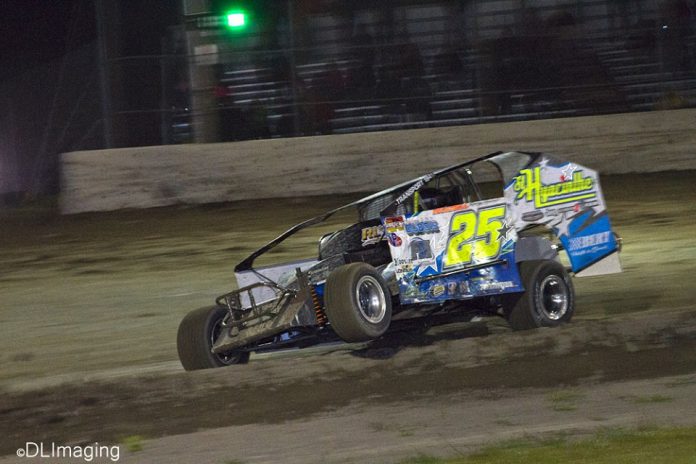 PLATTSBURGH, NY – Steve Bernier of St. Hyacinth, Quebec took the lead on lap-26 of Egglefield Ford Modified feature at Airborne Park Speedway and never looked back.
Todd Stone had the early race lead with his G. Stone Motors No. 1x, but Chris Raabe would work around and take the lead on lap-13. Raabe appeared to be in charge and well on his way to a seventh win in 2017, but Bernier had other thoughts.

Bernier had a 12-car length disadvantage on lap 20 and he quickly erased that when he worked underneath Raabe on lap-26. Bernier had smooth sailing the rest of the way home on his way to a $2,000 payday.

The 2017 DIRTcar 358 Modified Championship was claimed by Raabe. He scored 6 wins in 12 attempts.

Connor Cleveland capped off his Fidelis Care DIRTcar Sportsman Championship season with a win on the final point night. The win was the third of the season for the Corinth driver.


Cleveland started in position 14 for the 25-lap feature and had the lead by lap-17.
Zack Daniels was the early front runner before Bucko Branham caught onto the back bumper and challenged for the lead. Daniels held strong as Cleveland closed in and prompted a three-car battle for the top spot. Branham worked the rim around Daniels and looked to be pulling away, but a yellow flag put Cleveland alongside for the restart.

Branham elected to restart from the outside lane, but Cleveland was strong on the bottom and took the lead away by turn two. Cleveland was tested on multiple late race restarts with Branham, but the young gun aced them all to beat out the veteran.

“The track was really fast tonight,” Cleveland said. “I really enjoyed racing with Bucko tonight, he is probably the best friend that we made at Airborne this season in the garage area.”

Brent Jarvis collected his tenth win of the season in the Poirier’s True Value Renegade division. Keith O’Neil and Mark Caron crossed the line in second and third. Caron had problems in the tech line and was disqualified for rpm issues. Jimmy Bushey was placed third with Ron Alger and Tyler Irwin completing the top five.

Clem Bell appeared to have his first career victory in the Busch Beer Mini-Mod feature after Kris Clark broke on the right rear of his No. 14ny machine. Bell, however, was disqualified in post-race technical inspection for illegal tires. Michael Whalen inherits the win, his second of the season. Josh LaPorte, Dave Demore, Kris Clark and John Bradley finished in spots two through five.

Rolland Guay picked up his fourth win in the Strictly Stock division. Shawn Walker and Nathan Smart completed the podium. Jay Sprano and Matt Lapan finished in fourth and fifth.

Racing action resumes next Sunday for the DIRTcar Pro Stock Series and a $1,000 to win Sportsman Special. The Strictly Stock division will also be in action next weekend. For more information and to stay up to date, visit airborneparkspeedway.com or on Facebook at Airborne Park Speedway.