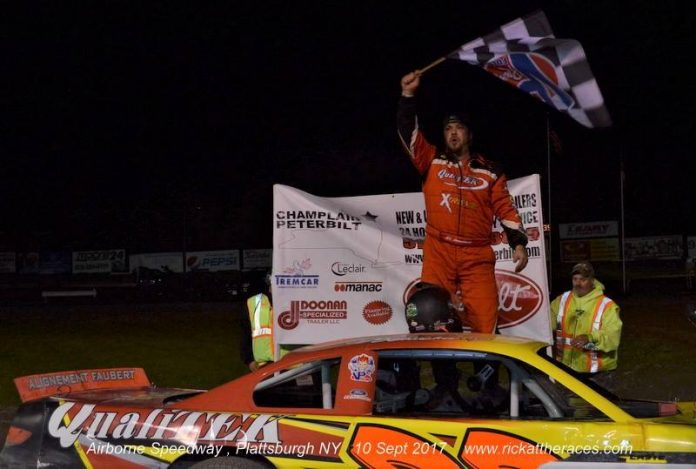 PLATTSBURGH- Rob Yetman was on his way to his fourth DIRTcar Pro Stock Series win of the year on Sunday at Airborne Park Speedway. CD Beauchamp changed that.

Beauchamp took advantage of a lap-27 restart and took the lead away from Yetman. Yetman would rally back and retake the with a slingshot move from high to low off turn four. Beauchamp didn’t go away however, as he used the inside of turns one and two to take back the lead and then drive away to a nine-car length victory. The win was his first of the season for the series.

The top three qualifiers out of the four heat races redrew for the first 12 starting positions. Yetman drew the lucky number 1 and led until the yellow flag on lap-27. It was smooth sailing for Yetman, at one point building up a near full back stretch lead. Yellow flags proved to be his nemesis on Sunday.

Yetman would hang onto the second spot, after a couple late challenges by Nick Stone who ended up third. Jocelyn Roy and Byron Wescott completed the top five.

Dany Gagné used some timely yellow flags to pick up the victory in the 50-lap $1,000 to win Sportsman event.


In the beginning stages of the race, Bucko Branham had the car to beat as he dialed in the top side of the track. On lap-12, Branham forced an aggressive three wide move entering turn one that led to contact that sent the No. 20 machine around.

Jamy Begor would take notes from his long-time competitor and he would work the top side of the speedway. Begor drove around the top three cars on the top of the track and got out to a convincing lead.

Yellow flags would slow down the flow of the race, however. In the final 25 laps of the event, multiple yellow flags would setup exciting restarts inside the first three rows. The preferred groove on the restarts was the outside, but drivers had every opportunity possible from the inside.

Daryl Nutting proved that to be true when he nosed ahead of Begor in turn two. Nutting appeared to have a card to play on Begor, but Nutting clipped the front stretch wall after sliding up in turn four. That would be the end of the night for Nutting and would now bring Gagné next to Begor for the restart.

Begor had used up his brakes and couldn’t hang onto the lead, as Gagné moved past on the inside of lap-39 and never looked back.

Bryan Cloutier came home in the second spot, with Branham rallying from the back up to third. Positions four and five went to Vince Quenneville and Jamie Lafountain.
The RevStar STR and Slingshot’s ran heats and feature events. Pierre Hébert was first across the line for the STR division with previous winner, Sabrina Blanchet in second and Plattsburgh’s Codie Aubin completing the podium. Jim Pollard was the slingshot victor over Felix Roy and Jim Gaige.

Shawn Walker is now tied for the lead in the win column for the Strictly Stock division with four. Rolland Guay, who also has four wins, finished second with Jay Sprano finishing in third.

Racing action resumes on Sunday, September 24 for the DIRTcar Sportsman Series plus the Leon Gonyo Memorial 358 event. For more information visit airborneparkspeedway.com or on Facebook at Airborne Park Speedway.