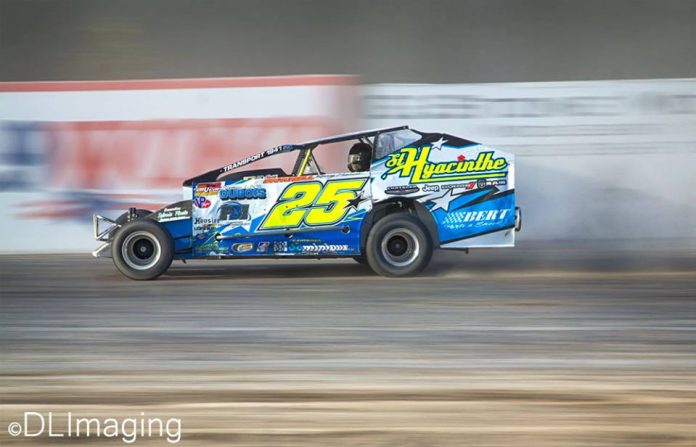 PLATTSBURGH, NY –Steve Bernier collected his second win of the season in the Leon Gonyo Memorial Modified feature. Bernier took the lead on lap-21 and never looked back.
Patrick Dupree and Todd Stone led the field to the green flag, but Dupree spun in turn one and collected Bernier, sending both cars to the rear.

Stone led until a lap-4 restart when Mike Perrotte worked past on the outside. The lead held up until lap-21 when Bernier worked by on the outside groove.

Perrotte held on for second with Chris Raabe finishing a close third. Stone and George Foley finished in position four and five.

Alex LaJoie was in position to capitalize on a late race opportunity when leader, Bucko Branham slipped up the track in turn three on lap-46 and LaJoie powered by on the inside for the DIRTcar Sportsman Series win at Airborne Park Speedway.

Cedric Gauvreau and Bri Ladouceur led the field down to the initial green flag of the 50-lap main event. Gauvreau took the lead and showed the way until lap-20. At that point, LaJoie looked inside of Gauvreau and completed the pass for the lead.


The lead was short lived though, as LaJoie jumped the cushion in turn one and “The Professor” Branham drove by down low.

Branham would lead the next 13 laps before he jumped the cushion in turn three. LaJoie pulled under Branham but Branham would pull alongside just half a lap later. The top two raced side by side for five laps before Branham pulled well off turn two on lap-40 and took the lead back.

Branham began to pull away before another mistake on lap-46 opened the door for LaJoie to sneak through. Branham tried to rally again and LaJoie worked upon heavy lapped traffic. On the final lap, Branham had a look to the outside of LaJoie and had momentum, but a lapped car slowed Branham’s progress and he had to settle for second behind LaJoie.
Robert Delormier ran a smooth race and finished in the third spot. Mike Stacey and Cedric Gauvreau finished fourth and fifth, respectively.

“It feels great to win after such a busy weekend,” LaJoie said. “After wrecking on Friday night in the heat race, this a great rebound for the weekend. I also enjoyed racing with the 20 car, he raced me very clean and I appreciate that.”

Brent Jarvis collected win number 11 of the season in the Poirier’s True Value Renegade division. Jarvis also claimed the championship in the division. Shawn Duquette was the apparent second place finisher on track, but problems in the tech line found his machine illegal. Jimmy Bushey was placed second with Tylor Terry being placed third.

Cam Gadue turned his first start into a good one in the Busch Beer Mini-Mod division by picking up the feature victory. Point champion, Mike Whalen finished in second with Josh LaPorte rounding out the podium.

Shawn Walker scored for the fifth time in the Strictly Stock division. Jay Sprano finished in the second spot with the champion of the division, Rolland Guay finishing in third.

The next event scheduled for Airborne will take place next Saturday at 3 p.m. for the Robin Branham Crash For Cancer Enduro. For more information, visit airborneparkspeedway.com or on Facebook at Airborne Park Speedway.