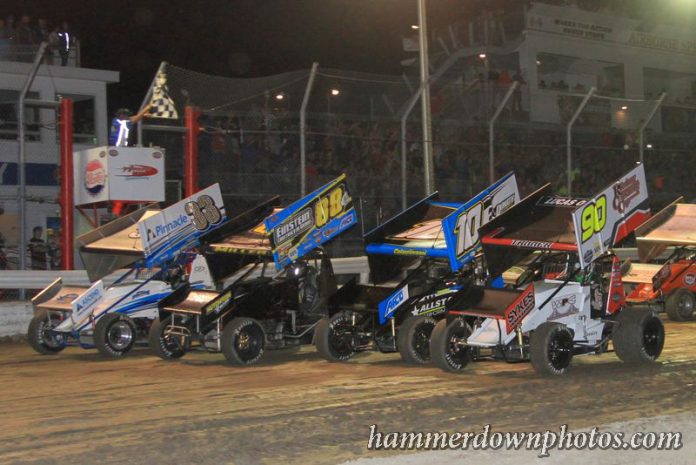 A double-header weekend is scheduled in Northern New York for the Empire Super Sprints teams with Mohawk Raceway on Friday and Airborne on Saturday.

Last season the Empire Super Sprints invaded Airborne and set the fastest lap times of the season on board their 360 sprint cars. Stephentown, New York driver Matt Tanner collected the checkered flag in 2017.

In addition to their regular season event, the Empire Super Sprints will battle against the Sprint Cars of New England (SCONE) and competitors from north of the border in the American/Canadian Sprint Car Clash on Sunday, September 23.


The event will take place following the final point counting event for the Empire Super Sprints at Fonda Speedway on Saturday, September 22.

A $4,000 check will be going to the winner of the event at Airborne. In addition, a 5-lap dash for $1,000 will take place between two Empire Super Sprints drivers, two Sprint Cars of New England drivers and two Canadian competitors. Lap money will also be available for the leaders of specific laps.

Both Reynolds and Sprint Cars of New England President Will Hull, are extremely excited that Airborne Promoter John Walker is going forward with the event.

“Will and I hope to make this an annual event,” Reynolds added. “With the purse and the event being at the end of the season, don’t be surprised if many big names try and contend for the $4,000 prize.”

The 2017 Lucas Oil Empire Super Sprints Champion, Jason Barney has committed to the event, along with the all-time wins leader, Steve Poiriér. Sprint Cars of New England defending Champion, Clay Dow has also marked the event on his calendar.

More information will be available for both events. Stay tuned to airborneparkspeedway.com and follow Airborne Park Speedway on Facebook for details.