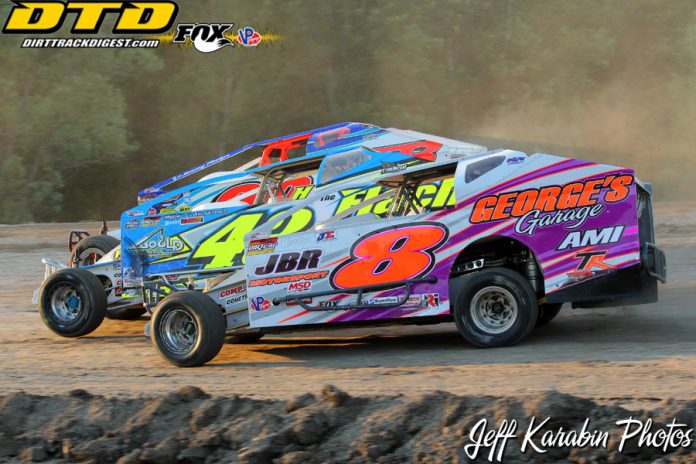 PLATTSBURGH, NY – The 2018 season at Airborne Park Speedway will return the same five regular racing divisions, with one of them receiving a name change. The 358-Modifieds, Sportsman, Mini-Mods and Strictly Stocks will return under the same name, with the Renegade division being replaced with the title of Super Stocks.

The World of Outlaw Sprint Car Series highlights the 2018 season as the premier event. This event will have the greatest magnitude of any event run in the speedway’s existence. Drivers from across the United States and Canada will venture to the 4/10th mile for the event that will payout over $52,000 in purse money on Wednesday, July 25. The series competes throughout the United States and the event at Airborne is the furthest in the northeast they will travel.

In addition, the Super DIRTcar Series Big Block Modifieds will invade the speedway for the second consecutive season. They will be in action just six days after the World of Outlaws Sprint Cars on Tuesday, July 31. The top names of Matt Sheppard, Brett Hearn, Billy Decker and Max McLaughlin are signed up for a full season with the Super DIRTcar Series and will do battle for over $33,000 is purse money.

The Empire Super Sprints will appear twice in 2018. A popular hit last season, they return and expect even bigger and better car counts than last season. They set the fastest lap times at Airborne during the 2017 season. The Fall Finale will include over $16,000 in purse money for the American/Canadian Sprint Car Clash in September.

DIRTcar also has regional touring series that will stop at Airborne in 2018. The DIRTcar Sportsman Series and Pro Stock Series have a following throughout the northeast and into Canada.


Airborne Park Speedway and Mohawk Raceway will have a five race Sportsman Series this season. Two events will be run at Airborne on May 26 and August 11, with the other three being held at Mohawk on July 20, August 31 and September 14. Each race will be a 50-lap distance.

Opening day is scheduled for April 28 with a post time of 6 p.m. All five of the regular racing divisions will be in action with the DIRTcar Sportsman Series headlining the card. A strong field of Sportsman drivers out of the Province of Quebec are expected as Quebec tracks are not scheduled to race that early in the season.

Pre-season events on the schedule include a car show at the Champlain Centre Mall in Plattsburgh on Saturday and Sunday, April 14 and 15. Drivers will be on hand to meet with fans and display their cars for the upcoming season. The following weekend will be an open practice with a time to be announced at a later date.

With a year under our belt, we expect our product to get bigger and better and to see another increase in cars and our fan base. With the addition of the World of Outlaws Sprint Car Series, our exposure to the racing community throughout the east coast will increase and the return of the DIRTcar Series and Empire Super Sprints will continue to impress our current fan base. Whether you are a regular or a part-time visitor, we look forward to seeing you at Airborne Park Speedway in 2018.