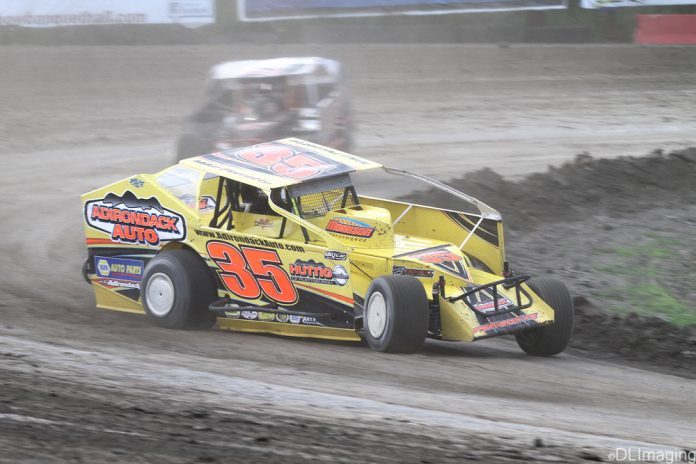 PLATTSBURGH – The 2018 racing season is set to kickoff this Saturday night at 6 P.M. at Airborne Park Speedway in Plattsburgh.

This event is the first on the 2018 calendar for the DIRTcar Sportsman Series. Last season, the DIRTcar Sportsman Series event at Airborne drew cars from the provinces of Quebec and Ontario, the state of Vermont and throughout northern New York and into the capital district. Group time trials will be run to determine a heat race lineup with a redraw for the top qualified cars after the heat races.

The 2017 358-Modified champion, Chris Raabe returns to defend his title. An impressive six-win season with twelve top five finishes in twelve attempts turned many heads and put the target on his back for this season. Steve Bernier will be the invading challenger for 2018. Bernier ran part-time last year and collected two wins. Todd Stone will also be looking to challenge for the top spot this year.

The Sportsman division appears wide open as “the professor” Bucko Branham, Nick Heywood, Jamy Begor and Moïse Pagé all look to build off an impressive 2017 season. Brent Jarvis will look to defend his title in the Super Stock division, as Strictly Stock champion, Rolland Guay moves up to the division to contend for the championship.


Racing action gets underway at 6 P.M. with grandstands opening at 4 P.M. Admission prices for opening day are set at $15 for adults with kids ages 12 and under free of charge.
The 2018 season is slated to be the biggest year yet in the speedways existence. Be sure to stop by and check out what Clinton County’s largest spectator sport has to offer.

Airborne Park Speedway is located at 70 Broderick Rd. in Plattsburgh. To get to Airborne, take exit 36 off I-87. Turn left and head one mile south. Turn right onto Broderick road. For more information, visit airborneparkspeedway.com.