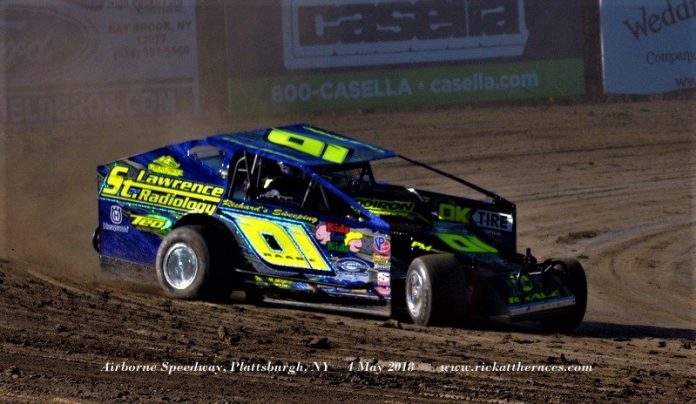 Mario Clair and David Hébert were the two drivers that took the field to the green. They traded the lead three times in the first five laps. Hébert led until lap-25 when Raabe dove underneath in turn two. Never looking back, Raabe drove to a seven car-length victory.

“We weren’t very good in the heat race,” Raabe said. “My dad and the crew did a great job with the adjustments. We drove the wheels off it tonight.”

Branham took the lead on the initial start from the outside of the front row. A number of early race yellows forced Branham to ace restarts for him to keep the lead. Martin Pelletier closed in on Branham in the final five laps and pulled alongside him on the final lap in turns three and four, but Branham had him at the line by a nose.

“I backed off a little in the final five laps,” Branham said. “I was trying to keep the car down to the bottom. We had a good car tonight.”

Shawn Walker scored the first victory of the year in the Strictly Stock division. Caleb Tourville and Matthew Lapan completed the top three.

Racing action resumes next weekend with Autograph Night presented by A-Verdi Storage
Containers. To stay up to date or for more information, visit airborneparkspeedway.com or on Facebook at Airborne Park Speedway.