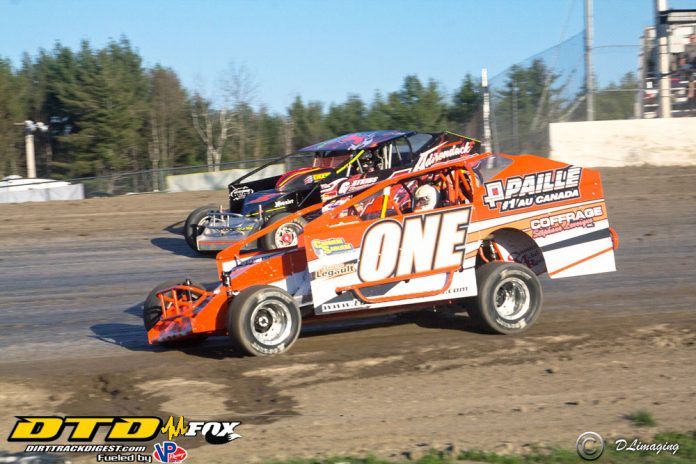 The Egglefield Ford 358-Modifieds, Poirier’s True Value Sportsman Modifieds, Ernie’s Discount Tools Super Stocks, Mini-Mods and Strictly Stocks will all compete on Autograph Night presented by A-Verdi Storage Containers. Spectators will have an opportunity to chat with their favorite drivers and receive autographs during the intermission portion of the racing card.

Post time is set for 6 p.m. with grandstand gates opening at 4 p.m. Grandstand ticket prices are set at $12 for adults with kids ages 12 and under admitted free of charge.
Pit sign in is scheduled to open at 2:30 with the pit gate opening at 3. Pit admission prices are set at $25 for DIRTcar members and $35 for non-members. Any children entering the pit area must be at least 10 years old and a minor’s release must be completed.

Last weekend, Two of Quebec’s top drivers started on the front row of the 358-Modified feature, but Alexandria, Ontario native and defending 358-Modified track champion, Chris Raabe started in position twelve and methodically worked his way through the field to win the 30-lap feature event.

Mario Clair and David Hébert were the two drivers that took the field to the green. They traded the lead three times in the first five laps. Hébert led until lap-25 when Raabe dove underneath in turn two. Never looking back, Raabe drove to a seven car-length victory.
Hébert finished second, with another Quebecois, Steve Bernard completing the podium. Steve Bernier and Todd Stone finished fourth and fifth, respectively.

Branham took the lead on the initial start from the outside of the front row. A number of early race yellows forced Branham to ace restarts for him to keep the lead. Martin Pelletier closed in on Branham in the final five laps and pulled alongside him on the final lap in turns three and four, but Branham had him at the line by a nose.

Shawn Walker scored the first victory of the year in the Strictly Stock division. Caleb Tourville and Matthew Lapan completed the top three.