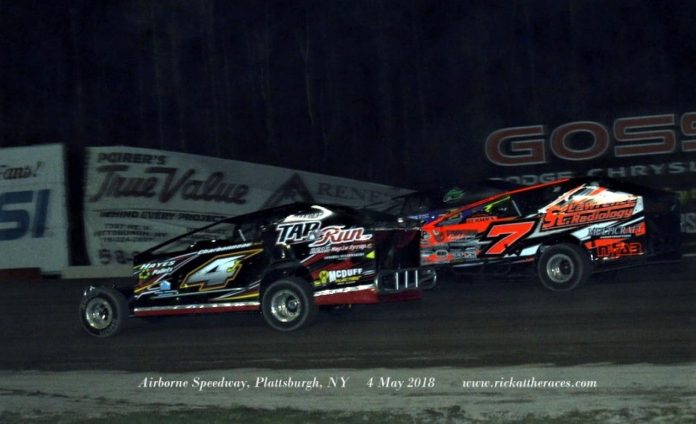 PLATTSBURGH, NY – A regular night of racing is scheduled for Saturday at six o’clock at Airborne Park Speedway in Plattsburgh.

Grandstand gates open at 4 p.m. and grandstand ticket prices are set at $12 for adults with kids ages 12 and under admitted free of charge.

Pit sign in is scheduled to open at 2:30 with the pit gate opening at 3. Pit admission prices are set at $25 for DIRTcar members and $35 for non-members. Any children entering the pit area must be at least 10 years old and a minor’s release must be completed.
Last week, Nick Heywood aced two late race restarts to collect his first win in the Sportsman Modified feature.

Heywood, who started in position 12, made the pass for the lead on the outside of Patrick Picotin on a lap-21 restart. Heywood would drive to a five-car length lead before a yellow flag slowed the pace on lap-23. With lane choice for the green-white-checkered finish, Heywood selected the outside and worked the cushion to a victory.


Picotin held on to the second spot at the finish line. Jamy Begor, Bucko Branham finished in the third and fourth positions, respectively.

Justin Severance failed post-race technical inspection and Lonnie Rivers was placed fifth.
Steve Bernier collected his first win of the 2018 racing season on board his number 25 machine in the 358-Modified division.

Bernier started second on the grid with the heads-up lineup. Chris Raabe started on point and dropped to the second spot. Todd Stone, Matt Woodruff and Danny Bilodeau completed the top five.

Zach Wood made it back to back victories in the Mini-Mod division. Wood took advantage of his lucky draw at the pit gate and led all the way. Cam Gadue and Josh LaPorte completed the top three.

Shawn Walker was the only other driver to remain two for two on the season with his win in the Strictly Stock feature. Caleb Tourville and Matthew Lapan finished in the second and third spots.

For more information visit airborneparkspeedway.com or on Facebook at Airborne Park Speedway.