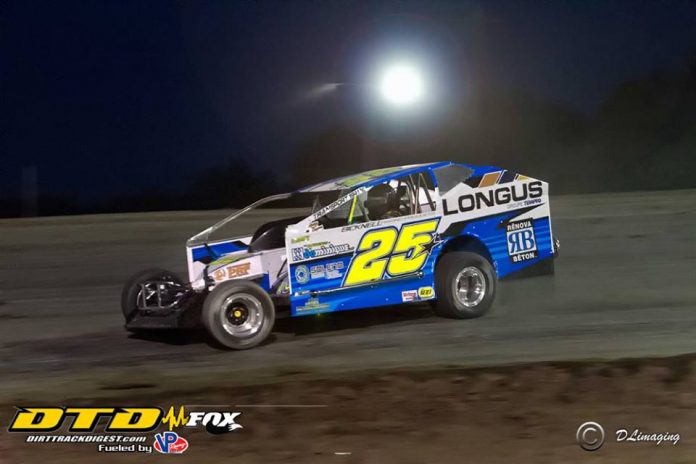 PLATTSBURGH, NY – Saturday’s Unique eCigs Sportsman Modified Series event had top competitors from across the northeastern United States and the provinces of Ottawa and Quebec in Canada battling for the $1,000 first place payout. The winner, however, didn’t have to travel that far.

Justin Severance and Jamy Begor brought the field to the first green flag of the 50-lap mainevent. Begor got the advantage from the outside and would lead until a lap-11 caution for debris.

Severance would retake the lead on the following restart, but not for long as another yellow flag slowed the pace on lap-16. Branham, who started seventh, would restart next to Severance and drive around to take the lead.

The two traded the lead seven times between lap-16 and lap-44, where Branham would pass Severance for the final time.

The restart on lap-40 provided the greatest action of the race. Branham and Severance would have an addition to their battle, when Nick Heywood looked three-wide on three different occasions between lap-40 and lap-43. Heywood looked to split through the middle of the two drivers, but couldn’t get enough grip to sneak through. His car went away in the final laps.

Branham ended up winning by a margin of half a second. Shane Pecore rallied late to get
Severance on the final lap for the second spot.

“Justin had the better car tonight, but I drove the wheels off of the car,” Branham said. “I’m not too old yet, huh?”

Steve Bernier picked up his second victory of the season in the Egglefield Ford 358-Modified feature. Bernier took the lead on lap four and never looked back in the green to checkered feature.  George Foley, Todd Stone, Matt Woodruff and Chris Raabe completed the top five.

Josh LaPorte became a first-time winner in 2018, as he crossed the line ahead of Zach Wood and Cam Gadue in the Mini-Mod feature.

Racing action resumes at Airborne next Saturday with the Empire Super Sprints presented by Poirier’s True Value. Post time is slated for 6 p.m. For more information, visit
airborneparkspeedway.com or on Facebook at Airborne Park Speedway.