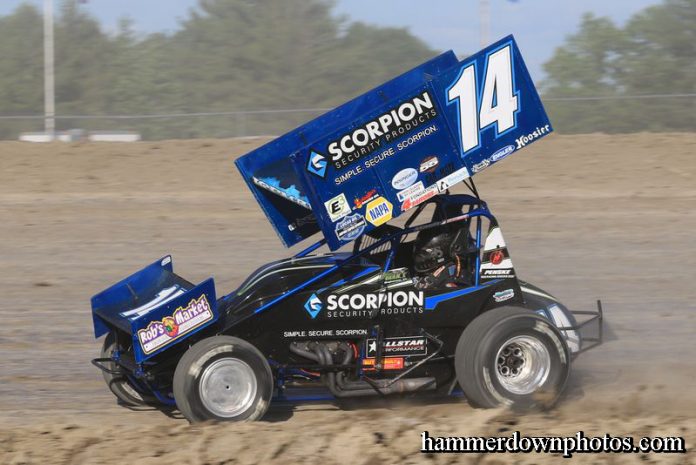 PLATTSBURGH, NY – Coleman Gulick has been the model of consistency so far in 2018 with the Lucas Oil Empire Super Sprints. The Binghamton, N.Y., driver has yet to finish outside the top 10 in the first seven events of the season. The one thing he was lacking was a feature victory.

Gulick finally was able to put a win on the 2018 resume on Saturday night at the Airborne Park Speedway as he beat out defending series champion Jason Barney and the club’s all-time winner in Steve Poirier. He earned over $2,000 for his win while adding to his current point lead in overall series points as well as the NAPA Auto Parts US Tour point standings.

“Early I was a little worried because I’m not very good in the slick,” said Gulick. “If you give me a little something to lean on I can put on a show and get a hold of the track better. I can’t thank Todd Berkheimer and my grandpa enough.”

Gulick started outside of Paul Kinney on the front row for the start of the 25-lap feature event. Gulick immediately darted to the top of turns one and two to take command of the feature event.

A torrid pace was set early as Gulick blasted his way around the extreme high lane on the speedway. It only took the Binghamton, N.Y., pilot six laps before he caught the tail of the field.

As he worked traffic, Gulick nearly saw his night come to an end on lap eight. Shawn Donath broke the front end of his ride causing him to slow in turn four. Gulick narrowly avoided contact with Donath’s car as he slammed on the brakes. Donath’s car limped to the infield to bring out the only caution of the race.

“I was on the binders pretty hard and I was just hoping he’d keep his lane and not dart to the bottom or the top,” stated Gulick. “I’m thankfully that he didn’t.”

Gulick got a great restart as did Steve Poirier and Jason Barney. Poirier moved into the runner-up position while Barney advanced from fifth into third on lap nine.

At halfway it was a Gulick encountering traffic a second time while Poirier felt the challenges up Barney for second. Gulick picked his way through traffic with Poirier and Barney closing to his rear bumper as the race reached its final third.

Gulick got held up briefly in slower traffic allowing Poirier to pounce. Poirier took a shot at the lead in turns three and four. Poirier tried to pull off the perfect slide-job only to have Gulick get back around him on the outside.

“Steve showed me a nose there and had my nerves rattled a little bit,” mentioned Gulick. “I had to pick it up a little bit after that.”

Eventually Barney got around Poirier on lap 21 to take over second to allow him to have his chance at Gulick. Gulick was flawless over the final handful of circuits to secure his fourth career series victory.

Barney, of Brewerton, N.Y., got back on track after a rough outing on Friday night at the Mohawk International Raceway with his second place effort. Barney redrew eighth for the start of the feature event. He made great use of the only restart of the race to put himself in a position to challenge for the win but came up a spot short.

“I felt like we had a really good car,” stated Barney. “We settled in as the track got polished off a little bit. That restart helped us a lot. It got us where we wanted to be there. We were able to get a few cars. Coleman ran a great race tonight. Steve was right there. I thought it was going to be heck of a battle with the three of us there.”

Poirier ran a consistent race after starting in the fourth position. The St. Mathieu de Beloeil, Que, driver was in the mix and even was able to almost pull off the win but he just couldn’t complete the clean pass for the lead. Ultimately he ended up third.

“I didn’t know if I had enough of a run to slide completely and I didn’t want to screw him up,” commented Poirier about his attempted pass for the lead. “I gave him a little break there. He was really good, but got caught in lapped traffic. I had my shot there. I had some fun racing them. It was a cool race.”

Paulie Colagiovanni worked up from 10th to finish in the fourth position while Mike Mahaney came across the line in the fifth spot.