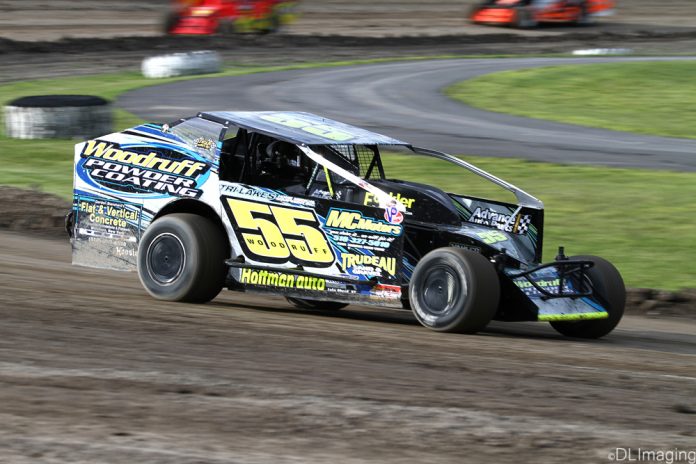 The race wasn’t that simple, however. Gulick ran into heavy lap traffic on lap-20, which allowed Steve Poirier to pull even on the inside of turns three and four. Gulick took action and began working the top of the track to pull away.

“I was worried early on because I’m not great on a slick track,” Gulick said. “Steve (Poirier) showed me the nose and I knew I had to pick it up.”

Bloomingdale’s Matt Woodruff collected his first win of the season in the Egglefield Ford 358 Modified division.

Woodruff started outside the front row, but held off challenges from Chris Raabe and Steve Bernier. Woodruff’s smallest lead was three car lengths over Bernier in the middle stages of the 30-lap race and he went on to win by 10 car lengths.

“My crew has worked so hard to get us here,” Woodruff said. “It’s been a long time.”

Ricky Thompson picked up his first win of the season in the Poirier’s True Value Sportsman Modified division.

Thompson took the lead on lap-17 by working the rim around the top of the track. Devin Willis closed in the final laps, but ran out of time in the 25-lap event.

Jordan Poirier took home the victory for the Quebec Lightning Sprint feature event. Poirier made the winning pass on a lap-17 restart. Mathieu Bardier and Xavier Lauzon finished in the top three.

Racing action resumes next Saturday night with all five of Airborne’s regular racing divisions in action for a 7 p.m. post time. For more information visit airborneparkspeedway.com