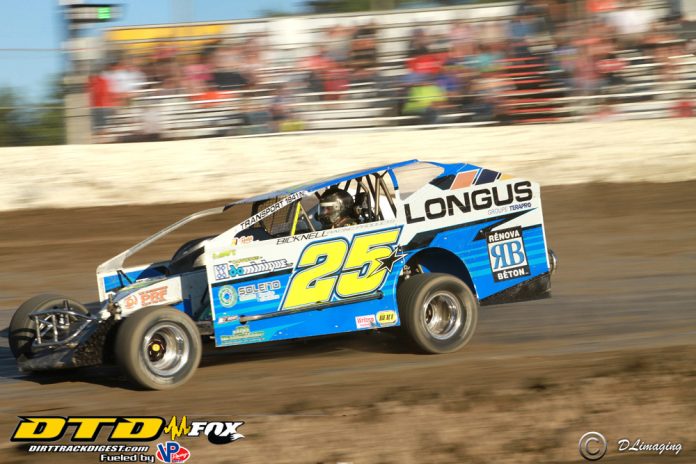 PLATTSBURGH, NY – Double points are on the line this weekend as a part of Mid-Season Championships at Airborne Park Speedway.

The Egglefield Ford 358-Modifieds, Poirier’s True Value Sportsman Modifieds, Ernie’s Discount Tools Super Stocks, Mini-Mods and Strictly Stocks will all be in action for regular distance events. Saturday will feature added pressure on contending drivers with double points up for grabs in the event presented by Heald Funeral Home.

Steve Bernier of St. Hyacinthe, QC. currently hold a six-point lead over the 2017 358-Modified champion, Chris Raabe. Raabe, the Alexandria, ON. native is coming off a dominating performance a week ago and will look to go back to back. Bloomingdale’s Matt Woodruff sits third in the standings, 44 points behind Bernier.

Nick Heywood’s second victory of the season a week ago allowed him to take over the Sportsman point lead and build a bit of a cushion. Bucko Branham was leading going into last weekends event, but ran into problems in the feature event. Jamy Begor’s second place finish allowed him to climb to the second spot in the standings, 28 points behind Heywood. Branham’s bad luck weekend dropped him to the third spot, 30 points back from Heywood.

Three consecutive victories have vaulted Tylor Terry to the top of the Super Stock standings. Terry now has a 12 point lead over the winningest driver at Airborne in 2017, Brent Jarvis. Michael Wright holds down the third point position, 30 behind the leader.

Zach Wood and Josh LaPorte are deadlocked at 220 points going into this weekend. Wood has two victories on the year, with LaPorte collecting just one checkered flag to this point. Cam Gadue is the only other driver in the division to pick up a victory and he sits third in points, just two back from the leaders.

Domination is the word best describing the Strictly Stock division to this point in the season. Shawn Walker has four wins and a 32 point lead over Matt Lapan and Caleb Tourville.

Racing action gets underway at 7 p.m. with grandstand gates opening at 5 p.m. Admission prices are set at $12 for adults with kids ages 12 and under free of charge. Come and enjoy some of the fast paced, side by side dirt track racing action that Clinton County’s largest spectator sport has to offer. 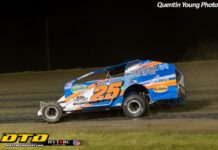