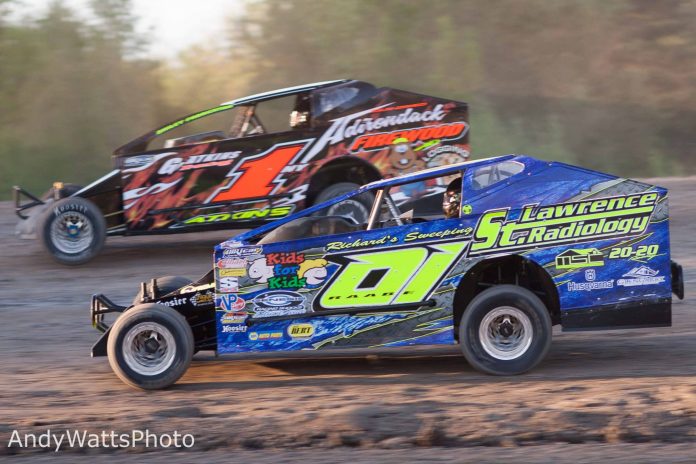 PLATTSBURGH, NY – One of the most popular nights of the season is scheduled this Saturday at Airborne Park Speedway. Dr. Joe Clauss’ spectacular fireworks display will be the highlight of the night in addition to the regular racing action presented by Champlain Peterbilt.

Admission prices are set at $15 for adults with kids ages 12 and under free of charge. Racing action gets underway at 7 p.m. with grandstands opening at 5 p.m.

Last time out, two of Airborne’s top competitors collected their second wins of the season.
Plattsburgh’s Nick Heywood drove from position 18 on the starting grid and completed a lap-25 pass to win the Sportsman Modified feature.

Jason McClatchie led throughout the first half of the race before Jack Speshock took over control. Speshock ran upon heavy lap traffic in the final laps and tried to work the bottom of the track, but Heywood found a lane around the top and made the pass for the win on the outside.

Chris Raabe took advantage of a quality starting spot in the 358-Modified feature. Raabe rolled from position four and quickly got to the lead. In the back half of the 30-lap feature, Raabe opened up to a full straightaway advantage and cruised to victory.

The 358-Modifieds also had a five lap, five car trophy dash for $500 to win. The top five point men heading into the evening had first crack at the dash. Third place point man, Todd Stone had engine problems in his heat and had to scratch from the dash.

Travis Bruno was the next man up and he capitalized on his opportunity. Bruno started on point and led all five laps, eventually winning by six car lengths.

Tylor Terry scored a hat trick with his third consecutive win in the Ernie’s Discount Tools Super Stock division. Terry was challenged by both Brent Jarvis and Shawn Duquette in a finish that was decided on the final lap.

Shawn Walker found victory lane for the fourth time in as many attempts. Lynn Denton and Matt Lapan completed the top three for the Strictly Stock division.

For more information and to stay up to date, visit airborneparkspeedway.com