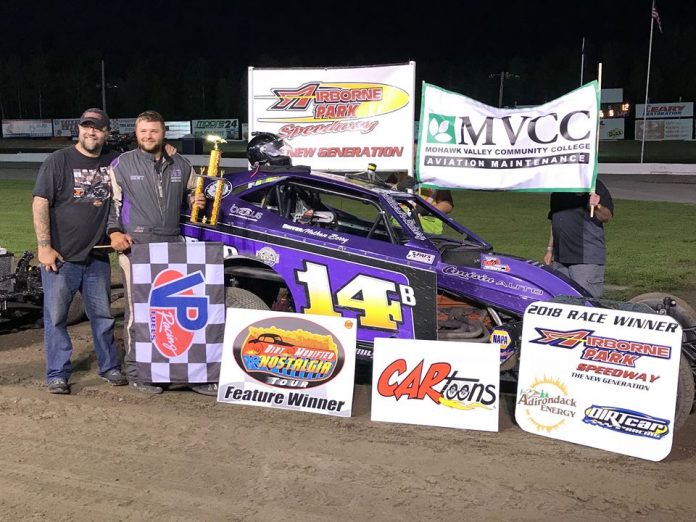 Plattsburgh, NY – The Dirt Modified Nostalgia Tour returned to Airborne Park Speedway for it’s second visit in as many years this past Saturday night.

Once again Athens, Ont native Nathan Berry put his potent purple Pinto into the winner’s circle for his third straight DMNT Modified victory. Mr. Excitement, Matt Barbour from Brockville, Ont would make Berry work for it in the early laps of the race and at one point held the lead briefly. Berry would slowly work the bottom of the red 37 and eventually wrestle the lead away. Berry and Barbour would settle in for the one, two spots while behind them Kingston, Ontario’s John Stanley would be applying the pressure on newcomer Floyd Billington from Glens Falls, NY.

A lap 6 caution for Tony Kamburelis and Matt Larrivee would see Berry option the outside line lane choice forcing Barbour to the inside. The Superman, Stanley would use this to his advantage restarting fourth behind Berry, blasting by both Billington and Barbour setting his sights on points leader Berry. But within a few laps Stanley would return to the low side allowing Barbour and eventually Billington to slip by. Evan Reynolds would hold off Bob Johnson to complete the fast five.

Finishing seventh on the track but picking up the Nostalgia class win was Kingston, Ont native Tim Hegarty.

Air Mail: Tony Kamburelis, Kevin Perry, Floyd Billington and Dan Wood made their first appearances with the DMNT at Airborne Saturday…Perry and Wood were DNS for the feature…Kamburelis into the fourth turn wall hard in the hot laps, missed his heat but was able to start the feature…Matt Larrivee was a dnf in the feature, clutch issues…Evan Reynolds with fuel cell issues, was able to make repairs to start the feature…Bob Johnson hauling 5 plus hours from the Southern Tier to make his first ever appearance at Airborne…Chip Gauthier running his second consecutive race in the Nostalgia class…Derrick Flynn once again teching the top 3 carb’s, all passed…DMNT Race Director Mike Verbeek catching up on old times with Airborne Race Director Denis Moquin…Series official Tom Coughlin also seeing familiar faces including flagger Ken Marshall…The DMNT closes out it’s points season this Saturday at Land Of Legends Speedway in Canandaigua, NY