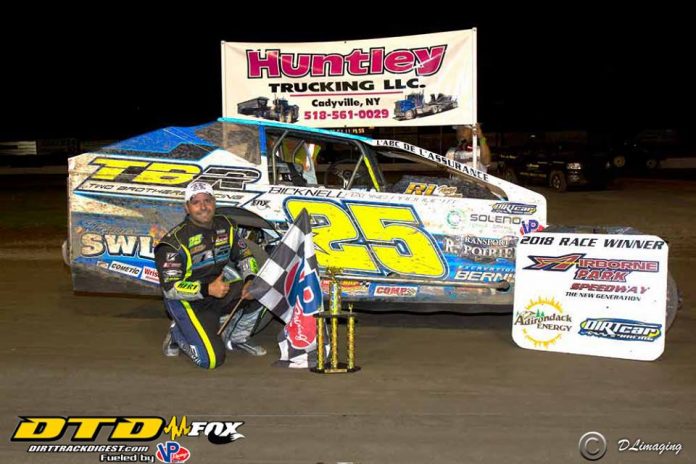 The division competed in two 25-lap feature events, with the second event making up for a lost race due to the Unique Sportsman Series rescheduling.

In the first event, McClatchie led until lap-21 when Phinney vaulted off turn four to take the lead away. The caution would come out a lap later to setup a three-lap dash for the win.

Phinney, with lane choice, selected the inside lane and made no mistakes on the restart, pulling away to victory. McClatchie, Jamy Begor, Jamie Lafountain and Jason Bruno completed the top five.

Feature two was all McClatchie.

McClatchie took the lead on lap seven and held off Chris Cayea on mid-race restarts for his first win. Cayea, Nick Heywood, Lonnie Rivers and Lafountain completed the top five.

Steve Bernier was dialed in for the 30-lap Egglefield Ford 358-Modified feature event. Bernier’s lap times were nearly three quarters of a second faster than the field.

Tylor Terry collected his sixth win of the season in the Ernie’s Discount Tools Super Stock division. Terry and Jim McKiernan battled alongside for the final five laps, at one point touching off turn four. Both drivers were sideways down the front stretch, but were able to collect their cars. Terry went on to win by a bumper.

Josh LaPorte scored for the fourth time this season in the Mini-Mod division, while Shawn Walker collected his sixth Strictly Stock feature victory.

Racing action resumes next Saturday for the Labor Day Special presented by Egglefield Ford. Post time for the event will be 7 p.m. For more information and results visit airborneparkspeedway.com or on Facebook at Airborne Park Speedway.