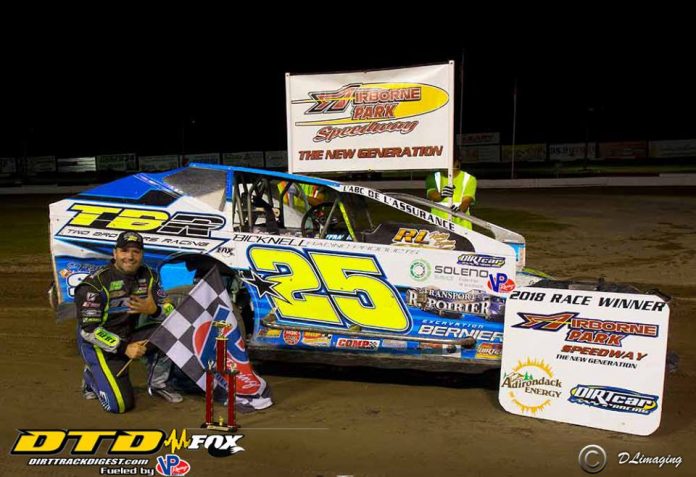 PLATTSBURGH, NY – Jeremy Roy has stood in the Airborne Park Speedway victory lane many times for his father, Martin, but tonight was Jeremy’s turn.

Codie Aubin was in search of his first win of the season, but would come up just short in the drag race off of turn four. His second-place finish was his best to this point in the season.

Nick Heywood collected the 2018 Poirier’s True Value Sportsman Modified champion. The title is his sixth in the last seven years.

2018 championship. Bernier passed Roger Labreche on lap-19 and dominated from there.
Dany Gagné finished in second with positions three through five going to Maxime Plante, Marc Johnson and Todd Stone. At this time the 358-Modified finish remains unofficial.
Double Features were run in the Ernie’s Discount Tools Super Stock divisions.
The first feature victory was collected by Tylor Terry, his seventh checkered flag of the season.

Shawn Moquin scored his first win of the season in the Mini-Mod division, while Shawn Walker won for the eighth time on the year in the Strictly Stock division.

Racing action resumes next weekend for the DIRTcar Pro Stock Series. Post time is slated for 7p.m. For more information visit airborneparkspeedway.com or on Facebook at Airborne Park Speedway.