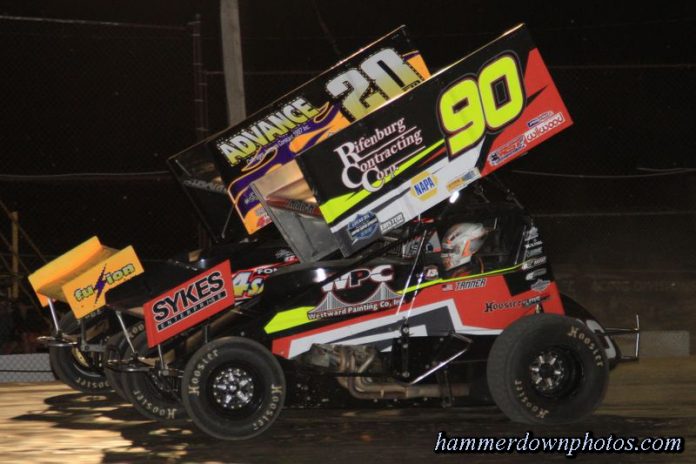 SYRACUSE, NY – It’s a big weekend for the Lucas Oil Empire Super Sprints! On Saturday at the Fonda Speedway, the 2018 champion will be crowned between Jason Barney and Steve Poirier. Then on Sunday, it’s the first ever $4,000 to win American/Canadian Sprint Car Clash.

Over that past month, both Barney and Poirier have been neck and neck for the 2018 Lucas Oil Championship. Coming into Saturday’s $2,000 to win, $300 to start Mach 1 Chassis A-Main there is just 17 points separating the two talented sprint car drivers for the crown. If Barney captures the crown, it will mark his second in a row and if Poirier takes the feat, it will tie him with Mike Woodring with his eighth title.

While the focus will be on the championship battle, many ESS stars and cars will be on hand for the event that pays tribute to Kramer Williamson. Expected to be in the field will be Matt Tanner, Coleman Gulick, Billy VanInwegen, Mike Mahaney, Paul Kinney, Shawn Donath, Danny Varin, Matt Billings, Jeff Cook, Chad Miller, Brett Wright, Kelly Hebing, Dave Axton, Cory Sparks, Josh Pieniazek, Josh Flint, Bobby Varin, Jeremiah Munson and many more.

E3 Spark Plugs brings you the timed hot laps, Car Mate Trailers sponsored heats is followed by the Trackside Body Works/Cobra Coaches Dash and the Lacaillade Masonry B-Main all leading up to the 25 lap finale. Points will also be awarded to the NAPA Auto Parts US Tour which Barney has clinched and the E&V Energy I90/I81 Series which Danny Varin has already take that point series.


The next day, many of the winged warriors will head up to Plattsburgh, NY where the American/Canadian Clash is set to take place at the Airborne Park Speedway. It’s an event brought to you by ESS and the Sprint Cars of New England Series (SCONE).

It’s Mohawk Weekend at Fonda and then a big $4,000 to win event at Airborne… It will be excitement guaranteed!!

For more Information on the Fonda Speedway:
Web: http://www.newfondaspeedway.com/

For more Information on the Airborne Park Speedway:
Web: http://www.airborneparkspeedway.com/