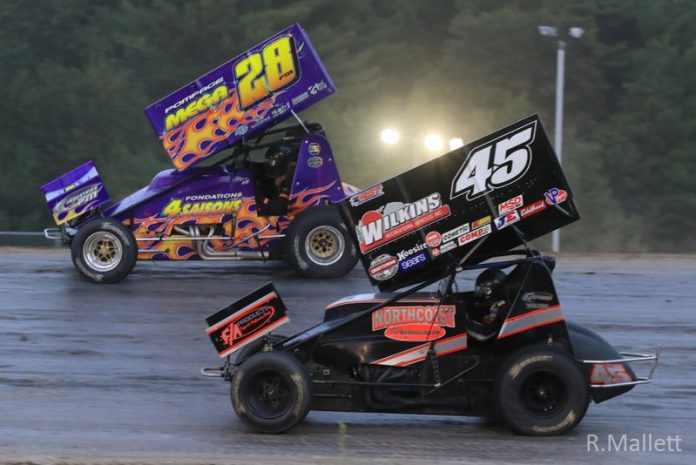 PLATTSBURGH, NY – It was the first ever American/Canadian Sprint Car Clash at the Airborne Park Speedway where the battle for the $4,000 top prize wasn’t decided until the waiving of the checkered flag by starter Austin Swamp.

Steve Poirier and Chuck Hebing swapped the lead twice in the final three laps with Poirier finally coming out on top of the former two-time Lucas Oil Empire Super Sprint (ESS) champion. For Poirier it capped a dream weekend as he claimed a record tying eighth ESS title the night before at the Fonda Speedway.

“When Chuck got by me I thought ‘oh I just lost the race’!” exclaimed Poirier right after, “He went under me and just pulled away. Then all of a sudden he just got too high in turn two and I got back under him. I just felt I got lucky.”

Poirier admitted afterwards, the multi-grooved track was challenging. “The track was better than I thought it would be. The top was fast but it looked like the bottom started to get some rubber. I was actually confused on to where to run,” he said jokingly. “I was down low and felt the rubber but I thought “Cobra” (Hebing) was up top and just got a run on me so I went back up there at the end. I don’t know it that was the right move.”

Poirier settled down and maneuvered through lapped traffic in the final lap to pick up his seventh win of the 2018 campaign. “To win the ESS championship last night and then to win such a competitive race today, it was a pretty special weekend for me and the crew.” Poirier summed up.

For Hebing, it was so close to the win in his first time ever seeing the Airborne 4/10ths mile, “I had a good run on Steve there coming off four and then I just went a bit to high in the next corner and he got back around,” said Hebing, “You just can’t give a guy like Steve that type of break. We wanted the win sure but had a good car, the guys have worked hard and each time we hit the track the car is good.”

For Matt Tanner, he made some late race moves and found himself in third at the checkers. “Those last two laps were a bit crazy, there were cars on top and bottom,” he said on the last few laps, “Jeff (Cook) got slowed up by a slower car and I was able to sneak under him to get third on the last lap. We had a good car and run here well, it was a good finish.”

The aforementioned Jeff Cook came home in fourth but did get has high as second as he found a good lane down low late. You can say he found the rubber before anyone else. Billy VanInwegen led several laps running the cushion but as the track changed and lapped traffic figured in he dropped back just a bit late to take fifth.

The special ESS vs. SCONE vs. Canada five lap dash with a $1,000 purse went to Alain Bergeron making for a Canada sweep of the night. VanInwegen and Barney followed the winner.

Davie Franek and Lucas Wolfe were in route but unfortunately an accident on Interstate 87 North stopped traffic for seven hours. Despite ESS and Airborne officials moving the schedule around hoping for their arrival, they were forced to turn around and go back home.