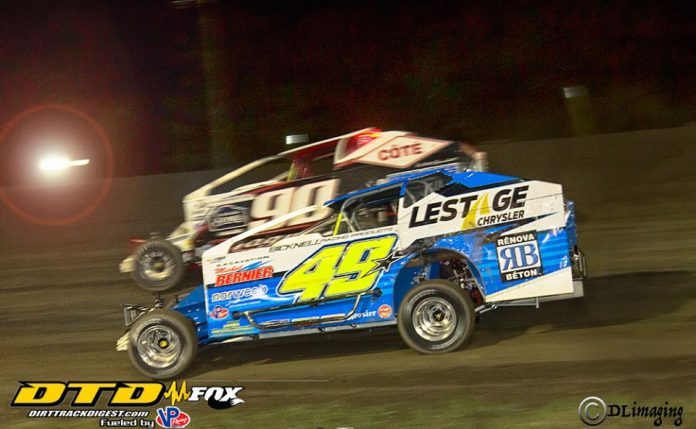 PLATTSBURGH, NY – Sometimes in racing you’re just in the right spot at the right time. That was the case Saturday night for François Bernier.

“Franky Boy” was running in the third position when Mike Mahaney and Steve Bernier got together multiple times, resulting in mechanical issues for both machines. François would inherit the lead and never looked back.

Chris Raabe was leading at the half-way point of the 30-lap Egglefield Ford feature event but a broken camshaft would end his night and setup the battle between Mahaney and Steve Bernier.

The two ran several laps alongside one another until the late race restart when Mahaney successfully completed a slide-job in turn one and two but Steve Bernier was able to slingshot to the inside and battle on the inside. Both cars made significant contact in the middle of the backstretch and again in turns three and four, damaging the rear ends of both machines.

François Bernier had to hold off Lance Willix in the closing laps to collect his first win in his first appearance at Plattsburgh Airborne Speedway in 2019.

Connor Cleveland collected his sixth win of the season in the 30-lap feature for the Poirier’s True Value Sportsman division.

Cleveland had a ten car length deficit that he was able to erase in the final six laps. Coming to the white flag, Cleveland closed to within a couple car lengths of Tanner Forbes’ back bumber. Forbes ran the inside while Cleveland rode the cushion. Coming off the fourth turn a lap car moved up in front of Cleveland but didn’t break his momentum as he beat Forbes to the line by .050 seconds.

After leading much of the event, Forbes had to settle for second and Dylan Rabtoy had a season best third place finish. Travis Bruno and Codie Aubin finished fourth and fifth, respectively.

Nathan Smart collected victories in both feature events for the Frennier Motorsports Strictly Stocks. Rolland Guay and Josh LaPorte finished second and third in both events.