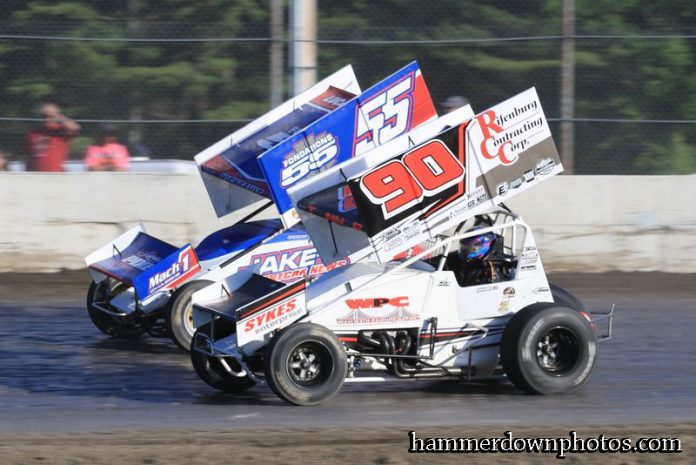 SYRACUSE, NY – The Lucas Oil Empire Super Sprints (ESS) are set to return to the Airborne Speedway in Plattsburgh, NY on Saturday night, June 27th. The addition is an important part to the tour for teams in the Eastern part of New York State, New England and across the border in nearby Quebec.

When the checkered flag dropped to end the 2019 at the Airborne Speedway the future seemed bleak on a possible re-opening of the facility after several years of hardship. It was recently announced Howard Commander, owner of Lebanon Valley and Albany-Saratoga Speedways, has stepped in to provide the track with new life. He is instilling the guidance and leadership of the management team of Albany-Saratoga promoter Lyle DeVore and former Airborne promoter Mike Perrotte who anticipate a successful 2020 season for the picturesque facility.

“ESS has grown to be one of the most popular events over the years with our fans and we wanted to make sure we had them on the schedule for this year,” noted promoter Lyle DeVore, “The sprints are always exciting and ESS has really built up a tradition at Airborne that we wanted to keep going.”

“We tweaked our schedule this year to give the teams off weekends but we always had Airborne in the back of our minds in case it did have some good news and would stay open,” said ESS’ VP Dean Reynolds, “To have Lyle (DeVore) and Mike (Perrotte) stepping in to keep the track open is huge and if there is anyone that will get the ball rolling in the right direction it will be them. We are glad they chose us to come back again this year.”

DeVore is a recognized authority on preparation of race track surfaces, as demonstrated week in and week out at Albany-Saratoga and Lebanon Valley Speedways, producing some of the best racing around. He will bring his expertise to Airborne, especially on the night the ESS winged warriors will be there.

Matt Tanner, Steve Poirier and Josh Pieniazek were all recent winners at Airborne and they will be in the field on the 27th. Add in Paulie Colagiovanni, Jason Barney, Chuck Hebing, Billy VanInwegen, Shawn Donath, Jonathan Preston, Jeff Cook, Scott Holcomb, Brett Wright and friends from the Sprint Cars of New England, and it will be a star studded field.

The winged sprint cars from the Lucas Oil Tour are back at Airborne! For more information please visit www.plattsburghairbornespeedway.com and also www.empiresupersprints.com .