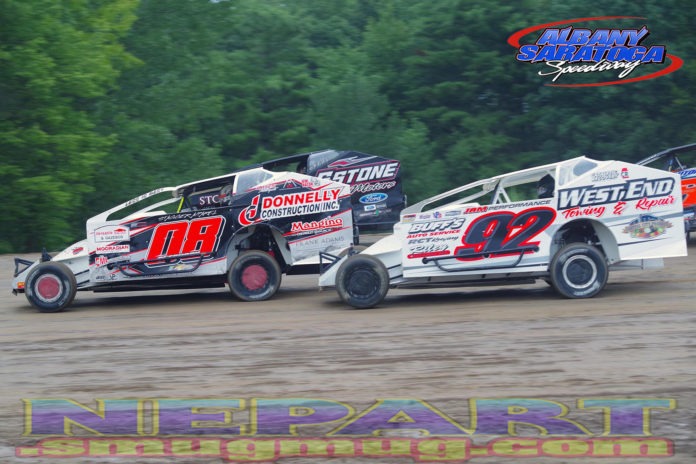 PLATTSBURGH, NY –  The “War Eagle”, Jack Speshock navigated heavy lapped traffic to collect the J&S Steel Sportsman Modified victory at Airborne Speedway in Plattsburgh.
Speshock took the lead on a lap-11 restart and worked onto lapped traffic at lap-20. Nick Heywood was lurking off the back bumper and passed Speshock on lap-22. The lead was short lived however, as Heywood was snookered behind a lapped car and Speshock pounced on the opportunity.

Travis Bruno worked his way into second and challenged Speshock in the final couple laps. As the white flag was unfurled, Bruno was right on the back bumper, but Speshock hit his marks in turns one and two to gain separation and drive away for the victory.
Bruno held on for second, while Heywood crossed the line third. Andrew Buff and Ricky Thompson completed the top five.

Jay Corbin was on point in the Hartson Total Opening Pro Stock division as he won by a comfortable margin. Josh Coonradt, Shawn Kirby, Mike White and Tyler Bushey completed the top five.