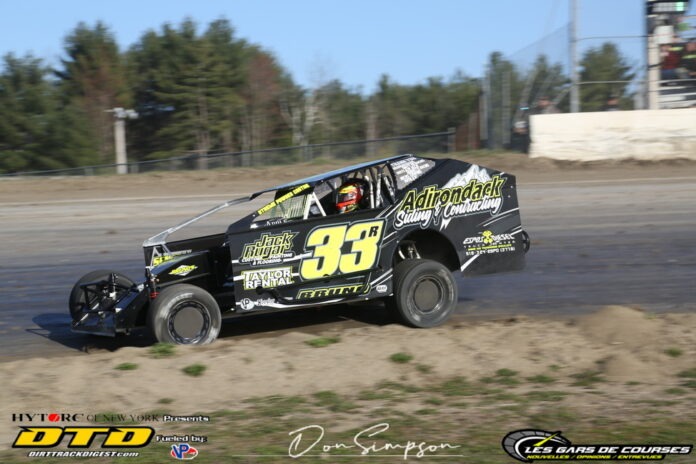 PLATTSBURGH, NY – Pulling into victory lane is always a good thing. It’s even better when it happens on your sponsor’s night at the speedway.

Travis Bruno made an early race move to vault by Bentley Gray off of the second turn to score a win in the J&S Steel Sportsman division’s 25-lap feature event. Bruno was challenged by teammate, Lonnie Rivers, on lap-18. Rivers was on the back bumper of Bruno, but a yellow flag came out the following lap, and Bruno pulled away on the ensuing restart. Rivers held on to finish in the second spot, while Tanner Forbes completed the podium. Codie Aubin and Jamy Begor finished fourth and fifth, respectively.

“Little Elvis” Greg Zindler Jr. collected his first career Airborne Speedway checkered flag in the Taylor Rental Street Stock division. Zindler survived several restarts after he passed Mat Parker, who had the early speed in the race. Bill Doner was closing quickly in the final laps, but couldn’t get any closer than the back bumper. Mat LaValley, Mat Parker and Caleb Tourville completed the top five.