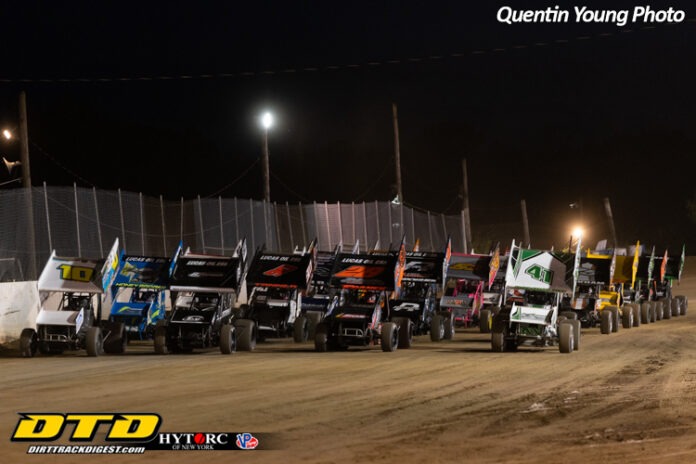 PLATTSBURGH NY – The high-speed, Empire Super Sprints are set to bolt around the Airborne Speedway this Saturday at 7 p.m. in an event presented by Casella.

The event marks first trip for the 360 sprint cars in the North Country region since 2019. Competitors are expected from throughout New York State, New England, and the province of Quebec. The traveling series has completed four events in 2022 and Danny Varin has taken home three checkered flags thus far. Last weekend, the Empire Super Sprints competed at Fulton Speedway and youngster, Paulie Colagiovanni collected his first win of the season.

In addition to ESS, the J&S Steel Sportsman, Hartson Total Opening Renegades, Taylor Rental Street Stocks and Northern Blacktopping Limited Sportsman will all be in action. The sprint cars will have time trials to set their heat race lineups, and also feature a dash for cash prior to their A-Main event. The Airborne weekly divisions will be battling for weekly championship points.

It’s a tight battle at the top of the Sportsman point standings with defending champion, Travis Bruno leading the division with 212 points. Robert Delormier and Beau Reeves are deadlocked in second with 210 points each, while Codie Aubin (206) and Lonnie Rivers (202) sit inside the top five. Zack Daniels is the defending Renegade champion and has been in charge to start the year with 286 points. Tylor Terry has a win under his belt and sits second in the point standings with 252, while Richie Turner is at 248. Tyler Irwin and Nathaniel Guay are tied for fourth with 238 points each. The Street Stock division has a tight battle at the top with “Little Elvis” Greg Zingler Jr. leading at 256 points, four points ahead of Mat Lavalley in second. Josh Laporte Sr. (235), Nick Harnden (224), and Nate Smart (221) sit inside the top five.

Racing action gets underway at 7 p.m. with grandstand gates opening at 5. Practice sessions commence at 6. General admission is set at $20 this weekend with kids under 10 free of charge.