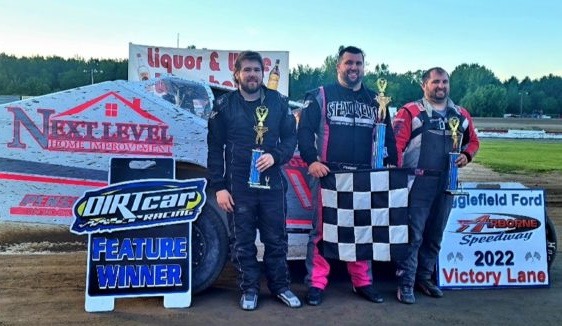 When the field came down for the green on a lap 17 restart, outside pole starting Pecore found the drive to lead going into turn one over Cedric Gauvreau. The gutsy move, proved to be the winning move. The final 12 laps saw the Cornwall, Ontario resident bring home his familiar #0 to the $1,000 victory at the Airborne Speedway.

The event was resumed after lap one when track conditions postponed the first try back on April 30th. It also kicked off both the North US and East Regions for the DIRTcar Sportsman.

“I just got a good run going down the front stretch and then I tried to see if I can slow his (Gauvreau) momentum going in turns one and two,” said Pecore on his winning move, “There was just a little patch of moisture in one and two and I thought if I can hit that I had a chance.”

That chance turned out to be the right gamble. “Once I got the lead I went back to the bottom as there was more moisture there,” he went on, “I figured if I could stay there, it would be tough for someone to get around me.”

Pecore’s speed definitely made it tough as he opened up some distance as the laps clicked on, “My car got better, I was tight early but as it got going it kept feeling better and better.”

Watertown, New York’s David Rogers echoed the same as Pecore with his car getting better in later stages. He made a pass on Gauvreau to grab second on lap 24 but his challenge on Pecore was slowed with a lap 25 caution.

“I definitely was getting faster as we kept getting laps in, but that last yellow kind of did me in,” Rogers, the defending DIRTcar Sportsman Champion for the World Short Track Championships at the Dirt Track at Charlotte noted, “When the green came back out my car got tight again and that was all I had. Shane got out there some and I had nothing for him.”

While many say they like to see a yellow in the closing stages, for Rogers it was the opposite, ‘I needed it to stay green. I had some real good momentum, and I might have had something for Shane. But he did a good job.”

That same lap 25 restart that hindered Rogers, was key for another Cornwall, Ontario resident in Gabriel Cyr. He went from fifth to third going under Gauvreau and Andrew Buff and brought his #94 home for the final spot of the podium.

“Those guys just slid up a bit in turn one and I just had the right lane to get by. I felt fast and just got the lucky break to move up,” said the driver that has visited victory lane in both Quebec and Ontario Provinces, “We are happy. It was a real tough field and to get a third is nice. Hats off to the track crew as well, we had a real nice track to race on.”

Jake Fountain stayed hot in the Taylor Rental Street Stock division, as he won for the third consecutive event. The division competed in a 15-lap non-points race as a bonus feature on the card. Fountain and Mat Parker traded the lead back and forth, but it was Fountain who prevailed. Parker settled for second with Josh LaPorte Jr. completing the podium.

Racing action resumes at Airborne this Saturday with a Father’s Day 50-lap, $1,500 to win special for the J&S Steel Sportsman division. In addition, the Hartson Total Opening Renegades, Taylor Rental Street Stocks and Northern Blacktopping Limited Sportsman will be in action. Post time for the event is set for 7 p.m., with hot laps beginning around 6 p.m. For more information, visit airborne-speedway.com or follow along on Facebook at Airborne Speedway.