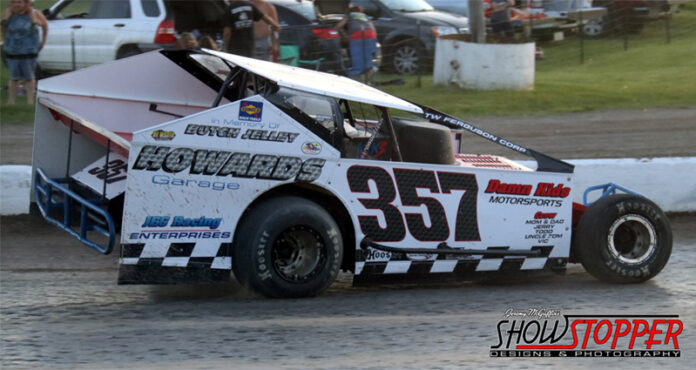 FAIR HAVEN, VT – Overall Points Update: Eight different registered King Of Dirt Racing drivers earned victories this past weekend including Gary Smith (FMP) who rocketed up the leaderboard into the top 10, but it was a pair of Vermont racers Marty Kelly III (DBS) and Jason Gray (BRS) who grabbed popular wins to lead the way.

First up on the podium of highlighted drivers is North Bennington, VT racer Marty Kelly III. He had a pair of top three finishes during double feature night at Devil’s Bowl Speedway including his first win of the season Saturday night. It was a popular win among fans and his peers driving his Howard’s Garage – DKM Fabrication number 357 Cyclone Racing Chassis.

Our third and final highlighted racer is Airborne Speedway’s Jamy Begor. The Moors Forks, NY driver earned his second win of the season to the delight of his fan base Saturday night as well. Begor has a solid base of top five finishes, and with a few more improved finishes the Gioiosa’s Wine & Spirits – J&S Steel number 19 Bicknell Racing Chassis will climb the standings.

OVERALL KOD CHAMPIONSHIP NOTES: The KOD Overall Championship leaderboard is now showing a drivers best 12 finishes. There is a lot of movement in the standings as drivers earn better finishes, such as Gary Smith from Five Mile Point. Gary has been red hot winning eight races this season in Kirkwood, NY and one he hit 12 races he rocketed inside the top 10.

Home track starting field size bonuses are coming in September. Since the beginning of the season KOD has kept a reminder of the bonus point program and it will surely shake up the standings as drivers are rewarded for the field size, they competed against during the summer months.

Other winners this past weekend included the sheriff Matt Janczuk who won his ninth race in a row and 10th on the season at Utica Rome. Alan Fink parked it for another win at Brewerton, and he’s also doing well at Thunder Mountain. Dustin Bradley earned his first win of the season at Mohawk, while Beau Ballard scored win number six at the home of heroes.