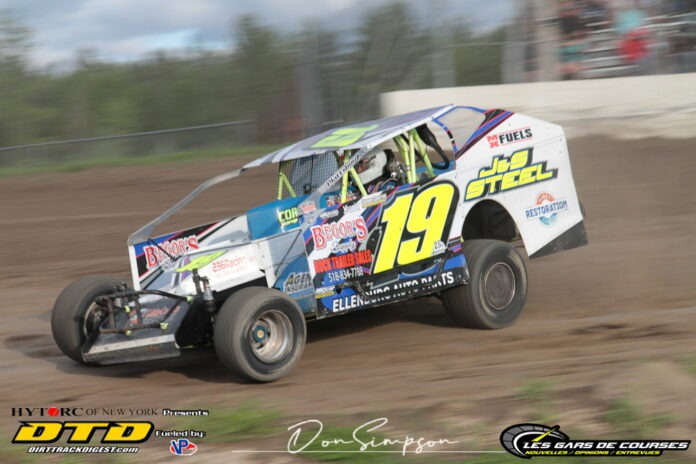 PLATTSBURGH, NY – Jamy Begor made the winning pass up against the wall coming out of the fourth turn to pick up his third win of the season in the J&S Steel Sportsman division at Airborne Speedway.

Begor started tenth on the grid and worked both the inside and outside of the track in his charge to the front. Jon Toohill led the first 20 laps of the race, but had to settle for second. Travis Bruno completed the podium, which was good enough to secure the championship for the division. Jason Bruno finished fourth and Bucko Branham finished fifth.

Tylor Terry collected his fourth win of the season in the Hartson Total Opening Renegade division. Terry made a three-wide move around the outside of Jim McKiernan and Billy Thwaits in the closing laps which proved to be the winning move.

“Kenny T” Ken Tourville won for the second time this season in the Taylor Rental Street Stock division. Tourville was able to fend off challenges from Nick Harnden and Jake Fountain in the final five laps.

Harnden finished in second, while Mat Lavalley completed the podium. Jake Fountain finished fourth and Josh Laporte Sr. rounded out the top five. Greg Zindler Jr. turned in a “DNF” but had a large enough lead to claim the division championship.

The Northern Blacktopping Limited Sportsman division also had a repeat winner. Scott Fitzgerald scored for the second time on the season. Cody O’Brien and Nate Leonard finished in the top three.

The 2022 regular racing is complete at Airborne Speedway but one event remains on the schedule for Sunday, September 18. 100 laps, $1,000 to win for the end of season Enduro. More information will be available on airborne-speedway.com and on Facebook at Airborne Speedway. 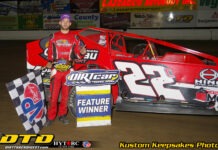