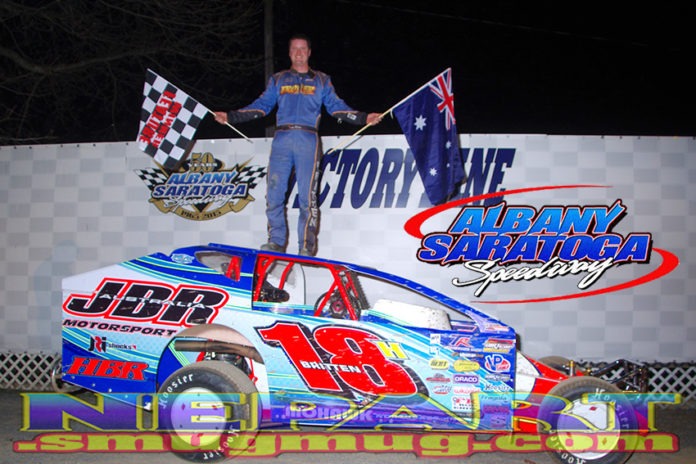 A partnership that wasn’t even thought of in November has now formed very quickly as everyone prepares for the 2017 Modified racing season.

Peter Britten suddenly became a free agent in December and at the eastern end of New York State there was a gentleman looking to get things going in the right direction for the upcoming year.

Veteran racer Andy Romano had stepped back from the sport, but got rejuvenated and suddenly Albany-Saratoga Speedway has a new potent combination to add to its weekly pit roster.

As was earlier reported on DirtTrackDigest.com, Andy Romano and Peter Britten will be calling Malta home each and every Friday night.

Andy’s son Mike, owner of Andy’s Speed Shop, told DTD, “Dad just got back into racing last year and bought a car from a customer of mine at Lebanon Valley. Danny Varin and (Jeff) Trombley drove the car, but dad wanted to get back into racing this winter in a big-block, but couldn’t find anyone to run the full season. We talked about I-88 (Afton Motorsports Park) and even running at Utica-Rome on Sundays, but the crew guys really didn’t want to work on Sunday night.”

Continuing he said, “Malta is close and they get the show over at a good hour. It’s not expensive racing and it is good racing. You don’t eat up tires there and it’s easy on engines.”

Mike said Peter was a perfect fit for the Friday night speedway. He explained, “I have known Peter as he was a customer of mine when he raced at Malta for a couple of years. I knew he was looking for a ride and my dad was not only looking for a place to race, but looking for a driver. We weren’t having any luck finding a driver and Peter was interested. The deal just came together.”

“Peter is a popular guy,” said Romano, “They guys at Malta like racing with him. He had a good reputation, is a good driver, well respected and it a good addition to Malta.”

Anyone who knows Britten realizes is he just one of those “nice guys” and that played a role in the new team being born.

Romano explained, “Dad is not a young guy and goes to the races to have fun. A win is a bonus, but understand he wants to win and not have a confrontation every night.”

Britten fared well in his brief time he was an Albany-Saratoga regular.

“I had multiple wins up there and was even second in points,” commented Britten. “I feel I was always a threat to win. “

He went there early in the season in 2016 and in fact won.

However, the thrill was short-lived as he explained, “HBR set my schedule as I worked for them and it wasn’t in their plans for me to run at Albany-Saratoga so I didn’t get to go back as Friday nights I was at Brewerton mentoring Max McLaughlin.”

The mentoring was okay with Peter, “It wasn’t bad and I enjoyed it,” but like any driver he noted, “I would have preferred to race.”

However, Peter explained, “I got to do a lot of racing last year and racing for HBR was a good opportunity. I ran weekly at Canandaigua and all the Super Dirt Series races. I had to give up Friday, but was able to race regularly.”

Currently the Romano team has a Teo in the stable, but Romano explained, “I think Peter just feels more comfortable in a Troyer and we will have a new Troyer. The plan is to start building the car in a couple of week.”

In late December Peter Britten was released from HBR racing which led to his need to find a ride.

“It wasn’t a total surprise,” cited Britten. “Some things on my side of the fence weren’t exactly working out and the organization was going through a change. I just didn’t fit in the way things were heading. I just wasn’t expecting it to end as soon as it did.”

Then came the deal with Andy Romano. Peter said, “I am very happy about it. I am very grateful for the chance he is giving me. This is a tremendous opportunity. Anyone who gives you a chance to drive their car is an honor and privilege. They put a tremendous amount of money into the car and I am very appreciative.”

Interestingly Britten noted, “Andy came up to HBR looking at the cars they were selling at the end of the season.”

Who would have imagined that a few months later the two would be together?

“I was looking for a home (racing) and apparently my name came up,” mentioned Britten. “We are both on the same wavelength and I feel it is going to be a good time this year. To be successful as a team you have to be on the same page, jell together and race toward a common goal. I really feel Andy and I want the same things to have fun and do well.”

The “deal” with Billy Colton at Troyer should be an asset as Britten appears to be quite comfortable in that type of chassis. It has been a chassis that he has competed in regularly since arriving from Brisbane, Queensland, Australia several years ago as his roots are in the Troyer stable.

Peter explained, “I will assist in building the car, but week to week wrenching I will not be as involved as there is a huge distance between us. However, they have a couple of very capable crew guys. I want to make sure everything is alright as we build the car and we will be ready to go.”

It appears that this team will run only at Malta during the 2017 season. However, Romano did say, “We will see how it goes.”

New York State race fans have seen Romano’s behind the wheel for years. Andy, Mike and A.J. have run all over the Empire State. Though there won’t be a Romano behind the wheel of a big-block Modified the family tradition continues.

Andy’s Speed Shop, Andy’s Service and Troyer Race Cars will be on the body of the new car and Peter Britten will be carrying the long history of the Romano family to the race track every Friday night.

Will Britten be doing any other racing this year?

He said, “I am looking for weekend and Super Dirt Series racing, but nothing is lined up just yet. I have to see how things go. There aren’t many rides out there for the series. I would like to control my own destiny and hoping I can eventually do that. However, I will need to find some support to help me. If I could find something else that too would be great.”

Britten does have a start and he noted, “HBR assisted me in getting started. They provided me with car that I ran last year. One was the car I shared with Dave Blaney and the other was my primary car. They were kind enough to give me those to get me started. They need some work, but the biggest problem right now is that I don’t have any motors and that is the biggest hurdle.”

Regardless Britten has maintained a positive frame of mind.

“I just need to work hard to get going again. I don’t feel sorry for myself and just need to make things happen.”

You can tell he is ready to race. He is firmed up for Friday night at Albany-Saratoga and it is possible if the right things happen that fans will see him in more action during the 2017 racing season. 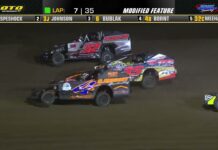 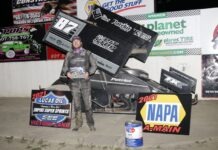