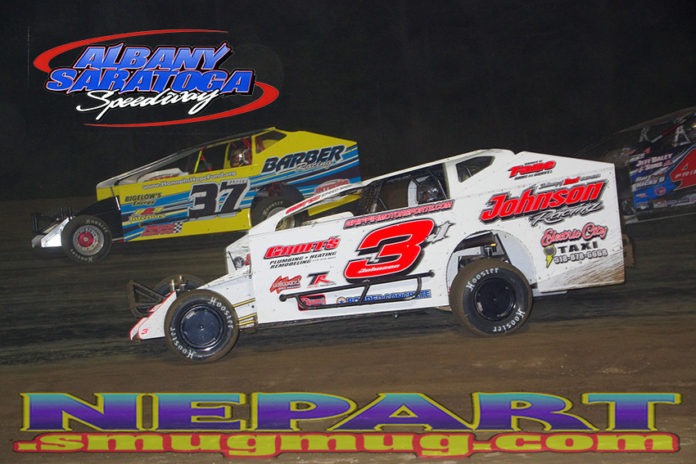 Malta, NY – As the warm weather slowly starts to enter New York’s Capital Region, all eyes are on the month of April and the start of the 2017 racing season at the Albany-Saratoga Speedway. The Great Race Place has an action packed schedule in place for the new season.

The doors open on Sunday April 9th for track tech and safety inspection. The following Friday (April 14th) the track will open for an open practice session for any division.

The 2017 season opener will take the green on April 21st with a $3,000 to win DIRTcar Modified event. It will also be the first of the $1,000 to win Sowle Trailer Repair (STR) events for the Sportsman division. Other STR events will be held on May 5th, May 19th, June 2nd, July 2nd, July 21st, August 4th, August 25th and September 1st. A week later the opening month of the season will come to a close with all divisions in action. The first Featherfoot Pro Stock Series will also be on the card.

On May 5th the month of May will kick off with a DIRTcar Modified qualifier for the Outlaw 200 at the Fulton Speedway. The Empire Lightning Sprints will also be on the card. The Hoosier Mama Mother’s Day Special will take place on May 12th while May 19th will see Law Enforcement Night. The month will end on May 26th with the Patriot Sprint Tour on hand along with all weekly divisions.


The month of June will see seven events scheduled. The month kicks off with the King of Dirt Pro Stock Series (plus all divisions) on June 2nd and the annual Mark Hughes Memorial for the Sportsman division on June 9th (plus the Featherfoot Pro Stock Series and all divisions). The Hoosier Daddy Father’s Day Special and Kiddie Rides take to the track the next two weeks. Brett Hearn’s Big Show 9 returns to Albany-Saratoga on Tuesday June 27th. The 100 lap Super DIRTcar Series event for DIRTcar Modifieds will also see the Sportsman on the card. Fireworks and the Featherfoot Pro Stock Series round out the month on June 30th.

The King of Dirt Pro Stock Series returns to open the month of July (7th). One of the biggest events of the season in the Capital District takes to the track on July 14th. The Summer Showdown will see the DIRTcar Modifieds ($5,000 to win), Sportsman ($3,000 to win) and DIRTcar Pro Stocks ($2,000 to win) each complete in a 50 lap event. The DIRTcar Pro Stock Series takes to the track on July 21st along with all weekly divisions. The month ends with Stan Da Man’s 32 night. All divisions will be in action competing in 32 lap events.

The Meltz Lumber Street Stock event will take to the track on August 11th along with the CRSA Sprint Car Series. On Tuesday night August 15th Brett Deyo’s Short Track Super Series comes to town with the inaugural Stampede at Toga. The King of Dirt Sportsman Series will also be on the card.

On Friday night September 1st the final point’s race for the DIRTcar Modified, Sportsman and DIRTcar Pro Stocks will hit the track. The annual Northeast Crate Nationals for the Sportsman division will take place on September 8th. The event is part of the King of Dirt Sportsman Series. Also on the card will be the Sowle Trailer Repair Pro Stock Showdown. The event will pay $2,500 to win. The King of Dirt Small Block Series will also be in competition.

The inaugural Small Block Modified Series will return for the season finale on September 15th. The Fall Finale will also include the $1,000 to win Classic Muscle Parts Street Stock Nationals. The Sportsman, Limited Sportsman, Four Cylinders and Empire Lightning Sprints will also be on the card.

For more information on the Albany-Saratoga Speedway including the complete 2017 racing schedule log onto to the track website at www.albany-saratogaspeedway.com.